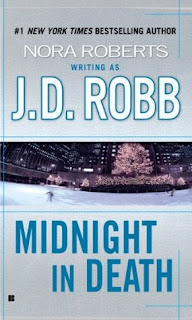 Eve's name has made a Christmas list, but it's not for being naughty or nice.  It's for putting a serial killer behind bars.  Now the escaped madman has her in his sights. With her husband, Roarke, at her side, Eve must stop the man from exacting his bloody vengeance...or die trying...

Eve and Dallas have barely been able to celebrate their first Christmas together. In this brief story, in novella length, Eve is after yet another killer. As always, Roarke is at her side while she works hard at finding the madman behind a series of brutal murders, and as Eve is one of his targets, she must manage to stay alive.

For a story told with so few pages, it is chock full of detail. We have the ever-loving couple, with Eve drawing closer and closer to her delectable husband Roarke. Then there is Eve's ever-irascible boss Feeney, and, of course, Peobody. Gotta love her. Who else do you just love, inasmuch as you want to hate? Only Summerset, Roarke's right-hand man and Eve's nemesis.

This story was so much fun that I couldn't wait follow my monthly schedule of reading each month, and so I went ahead and devoured the next in this series, Conspiracy in Death.