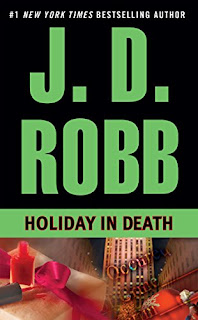 IN A FUTURE WHEN COMPUTER TECHNOLOGY BRINGS LOVERS TOGETHER, DATING CAN BE A DEADLY GAME...

No one likes to be alone during the holidays. And for New York's most posh dating service, Personally Yours, it is the season to bring lonely hearts together. But Lieutenant Eve Dallas, on the trail of a ritualistic serial killer, has made a disturbing discovery: All of the killer's victims have been traced to Personally Yours. As the murders continue, Eve enters an elite world of people searching for their one true love - and a killer searching for his next victim. A world where the power of love leads men and women into the ultimate act of betrayal...

A dating service for the exclusively rich. Something that could bring two lonely hearts together. However, a happily ever after is definitely not promised to some. as there is a brutal serial killer among their midst.

Lieutenant Eve Dallas is after a killer, and it is said serial killer who is searching for victims from the clients of Personally Yours. Can Eve find the killer while at the same time protecting the clients still using the site?

Holiday in Death is the seventh book in the In Death series by J.D. Robb. I am pleased to have read the prior books in the series while watching Eve solve case after case. Not only that, but have enjoyed the experience of watching Eve and husband Roake grow closer together. Now, at Christmastime, the two are sharing this together for the very first time.

It was rather cute when Eve struggled to find Roarke a gift. After all, he is richer than rich. What was more enjoyable was one particular gift Roarke gave to Eve. Without telling readers of this review, it worth mentioning because their relationship is a huge part as to why this series is so successful. Not only do Eve and Roarke have something so perfect together on a personal basis, but Roarke has been instrumental in helping Eve find horrible murderers. This is something that Roarke does yet again as Dallas struggles to discover what is happening at the dating site.

Although this is part of an ongoing series, this story can be read as a singular entry because not only do readers learn about how Roarke and Eve met, but readers are also reminded of Eve's past and what makes her such an incredible cop now. Despite how good she is, Eve  has more than a bit of temper in this book, to the point of showing frustration towards her coworkers. This proves that Eve is quite human,  I see this as growth in a character I have come to love and respect. This story was also rather enlightening when Roarke's childhood is discussed and how he became the man he is today. How can you not love these two?

I have already read the next book in the series before writing this review, Midnight in Death, and have started the very next one, Conspiracy in Death, and can only tell you that the series keeps getting better. I am very excited that it continues to the point that there are 50 books in the series as of February, 2020.