Review - A Promise for the Twins 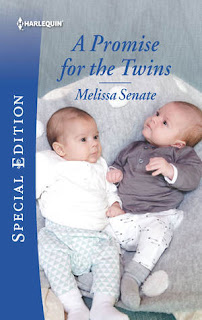 DESCRIPTION:
He made a promise…

Former soldier Nick Garroway is in Wedlock Creek to fulfill a promise made to a fallen soldier: to check in on the woman the man had left pregnant with twins. Brooke Timber is in desperate need of a nanny, and what else can Nick do but fill in? She’s planning his father’s wedding, and all the family togetherness soon has Brooke and Nick rethinking if this promise is temporary…or forever…

Nick Garroway is a former soldier and an honorable man. Before a soldier dies while saving Nick's life, the man asks Nick to check on a woman he got pregnant and abandoned. Nick plans on making sure she, and her twin babies, are doing okay. He then plans on checking on his father, as they were estranged while he was in the military. Finally, Nick plans on purchasing a ranch.

Brooke Timber is a single mother to twin sons. She is working hard at keeping her wedding planning business afloat despite stiff opposition, and the fact that her nanny had to take some time off. Her grandmother left her the business and when her grandmother was alive it was thriving. Brooke can barely rope in any clients, even though living in the town of Wedlock, where marriage and multiples thrive, Brooke is struggling.

When a great opportunity presents itself - and almost slips through her fingers - Nick shows up at her door. She thinks the handsome stranger is there to answer her ad for a temporary nanny. He is only there to check up on her, but when he sees her predicament, and hears two screaming babies, he jumps in and makes matters right, thus saving her business opportunity. Nick cannot explain why, but, in a matter of moments, he takes on the job of being the nanny, or more appropriately, manny.

What a wonderful book! If not for the babies, the love story is totally adorable. This book worked on every level. This is a nice, clean and sweet romance that I truly enjoyed. The story even added angst when it came to Nick's relationship with his father and brother. I think this gave what might have been an overly sweet story just the perfect balance.

This book by Melissa Senate is my first by her, but it certainly won't be my last.

Many thanks to Harlequin Special Edition and to NetGalley for this ARC to review in exchange for my honest opinion. 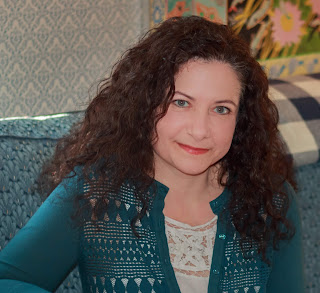 I've written many novels (see sidebar, in order of publication), including my debut, SEE JANE DATE, which was made into a TV movie that is often on the Hallmark Channel or Lifetime; THE LOVE GODDESS' COOKING SCHOOL, an Indie Next List notable; THE SECRET OF JOY; and two YA novels, THEODORA TWIST and THE MOSTS. I wrote two novels under a secret pseudonym, but I'll spill that secret if you email me to find out. I also wrote seven novels for Harlequin Special Edition under the not-secret pen name Meg Maxwell. A highlight of this career is that my books have been published in over twenty-five countries, from Russia to China to France. Bucket list dream: to visit every one of those twenty-five-plus countries. First: Italy, where I've been three times and can't get enough of.
I've also ghostwritten several novels, including one for a major celeb, but really can't say who (confidentiality contract insists) and several for New York Times bestsellers. My essays appear in It's A Wonderful Lie: The Truth About Life in Your Twenties and Everything I Wanted To Know About Being A Girl I Learned From Judy Blume, and I have short stories in American Girls About Town and Flirting With Pride & Prejudice: Fresh Perspectives on the Original Chick Lit Masterpiece.
From the late 80s until the year 2000, I was a fiction editor in New York City. I went from very young editorial assistant with 80s hair to senior editor with heels at Harlequin, where I worked for ten truly great years, then I spent two fun years at 17th Street Productions/Alloy Entertainment as a senior editor of teen fiction, including the Sweet Valley series, where twins Elizabeth and Jessica were in junior high, high school and college simultaneously. For the past 17 years, I've been a freelance editor (for publishing houses, not individuals), a copywriter (if you wonder who wrote the back cover and flap copy of the book you read last night, it might have been me), ghostwriter, and author, and I love all four hats equally.
I live on the coast of Maine with my great teenager, our sweet shepherd mix, Flash, and our comical lap cat, Cleo, and I'm now hard at work on my next novel.
My Harlequin Special Edition romances under the name Meg Maxwell are: A COWBOY IN THE KITCHEN, THE DETECTIVE'S 8 LB, 10 OZ SURPRISE, THE COWBOY'S BIG FAMILY TREE, THE COOK'S SECRET INGREDIENT, CHARM SCHOOL FOR COWBOYS, MOMMY AND THE MAVERICK, and SANTA'S SEVEN-DAY BABY TUTORIAL. Except for MOMMY AND THE MAVERICK, which is part of the line's latest and long-running Montana Mavericks series, all are part of the Hurley's Homestyle Kitchen series.
My 2018 titles as Melissa Senate are: THE BABY SWITCH; DETECTIVE BARELLI'S LEGENDARY TRIPLETS; THE MAVERICK'S BABY-IN-WAITING (part of the Montana Maverick's miniseries The Lonelyhearts Ranch); and WYOMING CHRISTMAS SURPRISE. Five novels will be published in 2019 starting with a special new animal-shelter focused inline miniseries in January: A NEW LEASH ON LOVE. In March: TO KEEP HER BABY. In June: A PROMISE FOR THE TWINS. In July: RUST CREEK FALLS CINDERELLA. In October: A WYOMING CHRISTMAS TO REMEMBER.