Review - More Than a Rogue 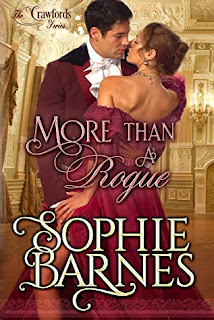 DESCRIPTION:
All she wanted was a kiss…

What she got, was fiery passion…

Emily Howard knows she is destined to be a spinster. She has accepted this fate, but that doesn't stop her from wanting to experience kissing. What she doesn't expect, is for Griffin Crawford, the handsomest man in the world, to do the honors. Or for all her female relations to discover her in his embrace. Naturally, marriage is instantly mentioned, but since Emily knows this is not what Griffin wants, she tries to escape him, her family and the ensuing scandal.

When Emily flees the Camberly ball in the wake of their kiss, Griffin goes in pursuit. He will not allow his sister-in-law's determined friend to risk her safety for any reason. And risk it she will if she means to return to her countryside home by herself. But the longer he remains in her company, the more he is tempted to kiss her again. If only he could risk falling in love and remain in England forever.

Emily Howard is a spinster and she is rather happy in life. She lives with her friend Cassandra and they care for orphaned children. Their friend Mary lived with them until she married a duke named Caleb. Emily does want one thing, however. While in London at a party Mary and Caleb are hosting, Emily wishes could experience a kiss, even if it should never happen again. The only man she can imagine kissing her is Griffin Crawford, Caleb's brother.

Eleven years previously, Griffin, along with brothers Caleb and Devlin, fled their father as he set paths for their lives none of them wanted. They all went their separate ways and have only gotten back together a year ago.

Griffin met Emily when he was looking for his brother Caleb. While drawn to her, marriage is the furthest thing from his mind so he never pursued her. Catching her alone one evening affords Griffin a unique opportunity. However, there were caught during their very brief kiss, but it was enough that Emily's mother demanded betrothal, as Emily has been compromised.

The last thing Emily wants is to be married to a man due to force, not love, so she flees back to the country. Quite worried, Griffin goes after her. She is distraught and alone, and Griffin fears for her safety. The two spend time together and it is apparent that they have a powerful connection. However, there is a problem they are both more than aware of. Griffin is only in England temporarily. He has a successful business in another country and longs to return to that life.

Their road to love is very bumpy indeed. Respect and honor are quite evident, but their future certainly isn't promised. It was a pleasure to read this story while watching the conflict evolve. This sweet story led to a satisfying conclusion. I look forward to the third book in this series, which will no doubt have Cassandra's and Devlin's stories.

Many thanks to Sophie Barnes and to NetGalley for this ARC to review in exchange for my honest opinion. 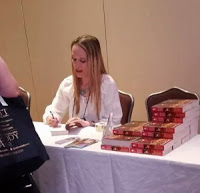 While living in Africa, Sophie turned to her lifelong passion: writing. When she's not busy dreaming up her next romance novel, Sophie enjoys spending time with her family, swimming, cooking, gardening, watching romantic comedies and, of course, reading. She currently lives on the East Coast.