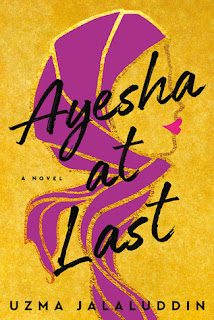 DESCRIPTION:
A modern-day Muslim Pride and Prejudice for a new generation of love.

Ayesha Shamsi has a lot going on. Her dreams of being a poet have been set aside for a teaching job so she can pay off her debts to her wealthy uncle. She lives with her boisterous Muslim family and is always being reminded that her flighty younger cousin, Hafsa, is close to rejecting her one hundredth marriage proposal. Though Ayesha is lonely, she doesn't want an arranged marriage. Then she meets Khalid who is just as smart and handsome as he is conservative and judgmental. She is irritatingly attracted to someone who looks down on her choices and dresses like he belongs in the seventh century.

Ayesha is torn between how she feels about the straightforward Khalid and the unsettling new gossip she hears about his family. Looking into the rumors, she finds she has to deal with not only what she discovers about Khalid, but also the truth she realizes about herself.

Ayesha Shamsi is a modern Muslim and is quite talented as a poet and has the opportunity to share her poetry. However, she works as a substitute teacher. She longs to get married but is not keen on the process involved with her family and her faith. However, Ayesha is behaving quite conscientiously. When she and her family arrived in in Canada, from India, her uncle helped in tremendous ways, something that she makes her feel deeply indebted. She hopes her job as a teacher will allow her to begin to pay her uncle back. Meanwhile, Ayesha cannot get away from her family, because her cousin Hafsa is front and center in her life. Hafsa is presented as having far more to offer than Ayesha and has been receiving numerous marriage proposals.

Khalid Mirza is a conservative and devout Muslim man. He is doing his best to follow the rules of his culture and tradition in his manner of dress and style and by allowing his mother to arrange marriage for him. When Khalid meets Ayesha, she affects him so much that he forgets to breathe, However, she is nowhere near as traditional as Khalid, so therefore, he finds her unacceptable and never once wants to trust the feelings he cannot help but to have for her.

While Ayesha is indeed drawn to Khalid, there are indeed obstacles that would prevent her from ever considering anything further with him. For one thing, there is much gossip about Khalid and his family, so bad, in fact, that Ayesha wants to be as far away from him as possible. She also knows that his mother has other plans for Khalid. Beyond that, Ayesha has very good reasons never to trust her heart.

Ayesha at Last is a multi-layered story. The stories intertwine quite well. The reader will be able to see things like Ayesha and her relationship with her cousin. Then there Khalid's mother and how she strives to orchestrate everything in his life. Meanwhile, he is facing huge adversity on his job. The fact that his boss shows remarkable aversion to him simply because of his religion and appearance was nothing less than despicable.

This debut novel was absolutely incredible! I can barely believe that Uzma Jalaluddin could write such an amazing book. So many scenes in this book are permanently imprinted in my brain. I learned about the culture and how, in today's society, things such as planned marriages still exist here in the United States. All I wanted was for Ayesha and Khalid to find love. For the author to write a book with so many conflicts and the resolutions that occurred, well, it was done expertly.

What an amazing book! If this is what this extraordinary author has to offer her readers, no doubt I will be first in line for any book she dares to pen. So, if you cannot tell already, I highly recommend this read. If one is overly concerned about the fact that this involves a situation where faith is often mentioned, they need not worry. What they will get is a book with real people, in real situations, with even some humor, oh, and beautiful poetry, finding their way to love just like any other romance novel one would read. Lastly, I would be remiss if I did not mention that this is a modern-day Pride and Prejudice retelling.

Uzma Jalaluddin is the author of AYESHA AT LAST, a revamped Pride and Prejudice set in a close-knit Toronto Muslim community. The book has been featured in the Globe and Mail, Toronto Star, Chatelaine, Quill and Quire and The New York Times. She has been a guest on television shows Cityline, CTV Your Morning and The Social, as well as CBC Radio. AYESHA AT LAST was recently optioned for film by Pascal Pictures. In addition to fiction, Uzma writes a culture and parenting column for The Toronto Star. She lives in the Greater Toronto Area with her husband and two sons.