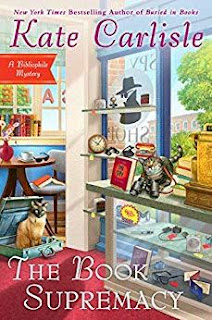 Newlyweds Brooklyn and Derek are enjoying the final days of their honeymoon in Paris. As they're browsing the book stalls along the Seine, Brooklyn finds the perfect gift for Derek, a first edition James Bond novel, The Spy Who Loved Me. When they bump into Ned, an old friend from Derek’s spy days, Brooklyn shows him her latest treasure.

Once they're back home in San Francisco, they visit a spy shop Ned mentioned. The owner begs them to let him display the book Brooklyn found in Paris as part of the shop's first anniversary celebration. Before they agree, Derek makes sure the security is up to snuff—turns out, the unassuming book is worth a great deal more than sentimental value.

Soon after, Derek is dismayed when he receives a mysterious letter from Paris announcing Ned’s death. Then late one night, someone is killed inside the spy shop. Are the murders connected to Brooklyn's rare, pricey book? Is there something even more sinister afoot? Brooklyn and the spy who loves her will have to delve into the darkest parts of Derek's past to unmask an enemy who's been waiting for the chance to destroy everything they hold dear.

Brooklyn Wainwright Stone is a newlywed. She is happily married to Derek and, as the story begins, they are returning about to return home from their honeymoon. They are shopping and Brooklyn is searching for the perfect gift for Derek. It is while shopping that they bump into Ned, an old spy friend of Derek's. This is appropos because the book that Brooklyn found is a first edition of one of Derek's favorite spy novels.

They decided to visit a spy shop that was recommended by Ned. The owner is eager and quite impressed with the find of the first edition that Brooklyn found for Derek and begs them to let him display the book in his shop. In all actuality, the book is worth quite a lot, and thus Brooklyn is reticent to allow it to be displayed.

Meanwhile, Derek receives a strange letter from Paris that announced that Ned is dead. How shocking and terrible. Then, another man is killed inside of Ned's spy shop. Brooklyn cannot help but wonder if the murders are connected and if that very same book that Ned wanted to display has anything to do with things.

Brooklyn was quite impressive and is uniquely gifted at restoring books. I found this part of the story to be so very interesting. Not only is Brooklyn exceptionally knowledgeable about books, but she also a knack for sleuthing. As this is the first read in this series, I hadn't had the opportunity to see Brooklyn grow as an amateur detective.

I must say that I was so impressed with this book by Kate Carlisle that I went to my online libraries and discovered that each title in this series is actually available. Not only did I make a list of the books in order to read, but will be doing so with another of her series. Indeed, she is an excellent author and I am eager to continue reading her books.

Many thanks to Berkley and to NetGalley for this ARC to review in exchange for my honest opinion.