Review - The Secret to Southern Charm 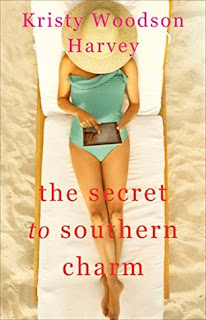 Leaving fans “practically [begging] for a sequel” (Bookpage), critically acclaimed author Kristy Woodson Harvey returns with the second novel in her beloved Peachtree Bluff series, featuring a trio of sisters and their mother who discover a truth that will change not only the way they see themselves, but also how they fit together as a family.

After finding out her military husband is missing in action, middle sister Sloane’s world crumbles as her worst nightmare comes true. She can barely climb out of bed, much less summon the strength to be the parent her children deserve.

Her mother, Ansley, provides a much-needed respite as she puts her personal life on hold to help Sloane and her grandchildren wade through their new grief-stricken lives. But between caring for her own aging mother, her daughters, and her grandchildren, Ansley’s private worry is that secrets from her past will come to light.

But when Sloane’s sisters, Caroline and Emerson, remind Sloane that no matter what, she promised her husband she would carry on for their young sons, Sloane finds the support and courage she needs to chase her biggest dreams—and face her deepest fears. Taking a cue from her middle daughter, Ansley takes her own leap of faith and realizes that, after all this time, she might finally be able to have it all.

Harvey’s signature warmth and wit make this a charming and poignant story of first loves, missed opportunities, and second chances and proves that she is "the next major voice in Southern fiction” (Elin Hilderbrand, New York Times bestselling author).

At the end of Slightly South of Simple, the first book in the Peachtree Bluff series, Ansley made a difficult and painful decision. Caroline also made a decision, one that would affect her life and that of her family forever. Then there is Emerson, who has a secret. Finally, Sloane. Sloane had just received the most terrible news. Was a sequel needed? Abolutely.

In this next book, The Secret to Southern Charm, three weeks have passed. The mother and the three sisters are no doubt each dealing with very difficult circumstances. Ansley is not only now focused on her daughters, she is coping with her ailing mother. Sloane has finally gotten out of bed, but now she is shopping excessively to cover up her pain. Caroline is stalwart in her choice to remain married to James, although still spending quite a bit of time with her siblings and their mother. Emerson is still holding onto her secret.

This story flows incredibly well. It is delivered in multiple points of view and watching the family go through its changes was often very difficult, and definitely very emotional. I just discovered this series, so I just read the first book. It was so good that I couldn't get past the ending without knowing what was going to happen next. Jumping right into this book was well worth the effort. As each woman dealt with their trials they grew and gained strength.

This book was so well done. I loved being able to feel so invested in the story and the characters. Just as in the first book, Slightly South of Simple (2017),  left readers with a cliffhanger. This one, The Secret to Southern Charm, does as well. Fortunately, I will be reading the third book in the series, The Southern Side of Paradise, due for release in May, shortly. I highly recommend both books and am certain that I will be just as enthralled with the next installment.