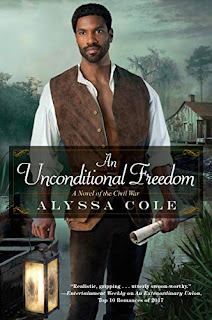 Daniel Cumberland’s uneventful life as a freed man in Massachusetts ended the night he was kidnapped and sold into slavery. To then have his freedom restored by the very man who stole his beloved’s heart is almost too much to bear. When he’s offered entry into the Loyal League, the covert organization of spies who helped free him, Daniel seizes the opportunity to help take down the Confederacy and vent the rage that consumes him.

When the Union Army occupies Janeta Sanchez’s small Florida town, her family’s goodwill and ties to Cuba fail to protect her father from being unjustly imprisoned for treason. To ensure her father’s release, Janeta is made an offer she can’t refuse: spy for the Confederacy. Driven by a desire for vengeance and the hope of saving her family, she agrees to infiltrate the Loyal League as a double agent.

Daniel is both aggravated and intrigued by the headstrong recruit. For the first time in months, he feels something other than anger, but a partner means being accountable, and Daniel’s secret plan to settle a vendetta and strike a blow for the Union can be entrusted to no one. As Janeta and Daniel track Jefferson Davis on his tour of the South, their dual hidden missions are threatened by the ghosts of their pasts and a growing mutual attraction—that might be their only hope for the future.

Janeta Sanchez has an incredibly difficult role. She is about to become a double agent. Her father has been unjustly accused of treason and imprisoned and if she succeeds, she hopes to get him released. Janeta will be working with a spy named Daniel Cumberland, but he doesn't realize that she is working at cross purposes.

Daniel definitely has challenges. For one thing he is trying to come to terms with the fact that his beloved now belongs to someone else. But the real issue is his assignment. He has the opportunity to take down the Confederacy. The Civil War is raging, but then, so is Daniel. His objective makes him aim high, so Daniel is forced to bury his own anger.

Meanwhile, both Daniel and Janeta grow in attraction to one another. But, this is no easy romance because their missions are secret to one another and this will no doubt bring conflict. Just as this is not a simple romance story, this is not a simple tale. The times are hard because of all of the goings on at that time. The horrors of slavery and the fact that Daniel was born free, then later sold into slavery is just so sad. While it is a fact that he was freed again, the angst he feels is very real.

Overall, the story takes place during the abolition of slavery and Daniel's experiences illustrate just how terrible slavery actually was. Conversely, Janeta's experiences are entirely different. As a matter of fact, her situation was just so difficult it was very hard to imagine her and Daniel ever coming to terms, never mind succeeding at love and the chance for a future together.

Reading all three books in this series in quick succession - An Extraordinary Union, A Hope Divided, and this titles, An Unconditional Freedom - was an eye-opener and a good, if not painful, reminder of a time in history when race and equality for women was utterly unbalanced, to say the least.

There were some serious difficulties Alyssa Cole no doubt faced when writing this story, even this entire series. In this case, for starters, she wrote a heroine who may have started off unlikable to many. She had to help this heroine evolve in the eyes of readers. Much more serious, however, was the fact that she tackled issues like the following - and this limited list is from her author's note at the end of this book - white supremacy, neo-Nazis, Confederates and slavery. Make sure to read the note in order to see the unfortunate but true comparison this well-informed author makes. There is also an excellent bibliography included.