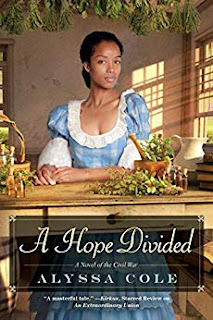 The Civil War has turned neighbor against neighbor--but for one scientist spy and her philosopher soldier, war could bind them together . . .


For three years of the War Between the States, Marlie Lynch has helped the cause in peace: with coded letters about anti-Rebel uprisings in her Carolina woods, tisanes and poultices for Union prisoners, and silent aid to fleeing slave and Freeman alike. Her formerly enslaved mother's traditions and the name of a white father she never knew have protected her--until the vicious Confederate Home Guard claims Marlie's home for their new base of operations in the guerilla war against Southern resistors of the Rebel cause.


Unbeknowst to those under her roof, escaped prisoner Ewan McCall is sheltering in her laboratory. Seemingly a quiet philosopher, Ewan has his own history with the cruel captain of the Home Guard, and a thoughtful but unbending strength Marlie finds irresistible.

When the revelation of a stunning family secret places Marlie's freedom on the line, she and Ewan have to run for their lives into the hostile Carolina night. Following the path of the Underground Railroad, they find themselves caught up in a vicious battle that could dash their hopes of love--and freedom--before they ever cross state lines.

Marlie Lynch plays a special role during the Civil War. She is aiding the cause for peace with coded letters. She is a herbalist. Having learned at her mother's knee, Marlie is able to use her concoctions to aid the Union prisoners. All the while, she has a goal to help fleeing slaves and those free who could be kidnapped and forced into slavery. Marlie has a very difficult time due to her heritage.

Marlie was never a slave, yet her mother was, and her father was a white man whom she never knew. Shockingly, the Confederate Home Guard takes over Marlie's home for their operations and that is when Marlie discovers that an escaped prisoner, Ewan McCall, is hiding in her laboratory. He was a spy who was captured, but managed to escape.  Ewan is a unique man. He has a rather interesting personality, and can compartmentalize so well that it made him very valuable. His actions caused him a lot of angst and this is explored during the pages of this book.

There is pressure that not only faces the two, but builds up rather quickly. In part this is due to Marlie's status, and she faces quite a bit of hate. Other factors come to play. These  force Marlie and Ewan to flee. Using the Underground Railroad, they try and run for their lives. This draws them together, even to the point of love, despite the fact that Ewan is a white man, making a future between them seeming utterly impossible.

A Hope Divided is the second book in the riveting Loyal League series. The story is compelling and does a fine job balancing the incredibly difficult history of the Civil War while dealing with the beginning of the abolition of slavery. Although this book could do well as a standalone, the series is one that would be benefited by reading in order. Those who read the first book will remember that Ewan is the brother of Malcolm, the hero in the first story.

The first book in the series is An Extraordinary Union. It is incredible the extent of research the author has gone to in the writing of this series. The next book is An Unconditional Freedom.