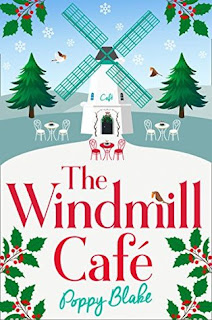 Escaping the bustle and heartbreak of her old life in the city, Rosie Barnes can’t believe that her dream of setting up a café has come true. Whether it’s her chilled homemade lemonade, sticky chocolate brownies or warming mince pies, Rosie’s café draws guests in from far and wide, and the folk of Willerby can enjoy it come rain or shine.

But some mysterious events soon threaten the picturesque town she now calls home, and with the help of ruggedly handsome local Matt Wilson, she must find out what’s going on before the reputation of the town – and her beloved café – are ruined.

From the scorching summer sun through to the crisp winter frosts, Rosie is in for a year she’ll never forget…

The Windmill Café is an omnibus containing three novels all set in the same location. In the first story, Rosie Barnes has fled to the small town of Willerby to attend a garden party. This should be a great distraction to Rosie as she has experienced a bad breakup. Having caught her fiancé in the act of cheating was horrible for Rosie. Things are still not pleasant for Rosie, however, as an apparent accident occurs to one of the guests. Was it an accident that occurred, or was it actually a poisoning? How could it have happened? Now working at the Café, Rosie decides to team up with a town local, Matt, to solve the case.

The police appear to be dragging their feet. Suki, a singer at the lodge, is the woman that was poisoned. A lot of questions arise and Rosie won’t rule out any possibility as to the cause. Is the town safe? Better yet, what of the Café? This is Rosie’s chance for a new life. Yes, she must get to the bottom of things.

In this entry into the series, Rosie and Matt begin interviewing everyone that could possibly have been responsible for poisoning Suzi. all the while a gentle romance blooms between Rosie and Matt.

As I read the second book in this series six months ago, I looked forward to reading the series in order. I found the dialogue to be rather droll, but I am glad to have given this series a try.

In this second book in the series, Rosie is still quite busy at the Windmill Café, but wonders if she wants more. Presently, she agrees to help her good friend Matt Wilson on one of his outdoor expeditions. After a drudging hike and a night's sleep, the first morning brings on worries. As leader of the expedition, Matt has an early morning pre-sunrise hike planned, but he and the rest of the group oversleep. Two things are quickly realized. They must've have been poisoned, causing them all to oversleep, and one of their party is missing, and is discovered after having been shot with an arrow, and it was no accident.

Meanwhile, although having suffered recent heartbreak at the hands of her ex-boyfriend, Rosie now finds herself quite drawn to Matt, and he seems to feel the same. Over the summer, there was a poisoning at the café, and Matt and Rosie teamed up to solve it, and it appears they plan on doing the same again this time, a crime-solving duo.

This is a cute story with a budding, sweet romance. Having not read the first in the series, I still felt connected enough with the story and the characters. This was a very quick read with a great little mystery. I was surprised at the ending, which means to get the complete story, the third book in the series must be read when it is released.

When Rosie’s ex Harry turns up she is nonplussed. Why is he in Willerby? She has gotten her life back together and she’d much rather prepare for the Christmas celebration about to take place at the Windmill Café. Plans have been underway for months. There will be a Christmas tree competition and Rosie wants everything to run perfectly. Rosie hardly has time to think of the sudden business proposition that Harry makes. Not only does she have her current job to consider, there is Matt, the man she met and has worked with while at the café.

Rosie gets even more distracted by a change in events. There is a cycle race about to take place, and one of the town’s members, Theo, is injured. Another accident? Of course, Rosie doesn’t believe that, so she starts her own investigation.

This was a nice addition to the series.  As in the previous two books, the mysteries are rather light, as is the romance. So, the crime, Christmas and the planned wedding of two people named Josh and Grace all tie in together to make an engaging story. This really was a nice conclusion and I am glad that I got to read the entire series in order.

Many thanks to Harper Impulse and to NetGalley for this ARC to review in exchange for my honest opinion.

Poppy Blake is an avid scribbler of contemporary romance and romcoms. When not writing she loves indulging in the odd cocktail or two – accompanied by a tower of cupcakes. The Windmill Cafe series follows the life and loves of Rosie and Matt in the glorious countryside of Norfolk and will be opening its doors in March 2018 with Summer Breeze. Why not pop in for a visit?