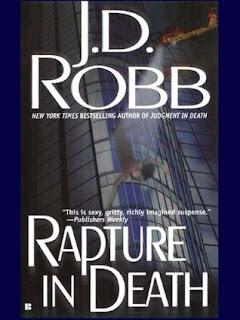 They died with smiles on their faces. Three apparent suicides: a brilliant engineer, an infamous lawyer, and a controversial politician. Three strangers with nothing in common--and no obvious reasons for killing themselves. Police lieutenant Eve Dallas found the deaths suspicious. And her instincts paid off when autopsies revealed small burns on the brains of the victims. Was it a genetic abnormality or a high-tech method of murder? Eve's investigation turned to the provocative world of virtual reality games--where the same techniques used to create joy and desire could also prompt the mind to become the weapon of its own destruction...

How is it that three women die under very similar circumstances? All were apparently very happy when they died, but all three deaths were ruled suicides. Why the conflict? Also, the three women were all professional, one a brilliant engineer, then a successful lawyer and a controversial politician. They had nothing in common but the cause of their deaths.

Seemingly, only lieutenant Eve Dallas finds these deaths suspicious. She further investigates and she finds a common denominator. As always the danger is in this story is in stiff competition to the sizzling connection between Eve and Roarke.

This futuristic story, Rapture in Death, is a bit more advanced in that regard than the prior three books in this series. This is especially so because Eve and Roarke happen upon a deadly virtual reality game. They could lose everything. Will Eve be able to get to the bottom of things before that very game becomes deadly to her?

The In Death series is a long-running one, with 49 books offered thus far. As each title gives a brief history of the pasts of Eve and Roarke, and how they found one another. However, it is a very exciting series and might just definitely be enjoyed more by reading in succession.

I plan on reading and reviewing each title on this blog. Feel free to search any of my previous reviews.