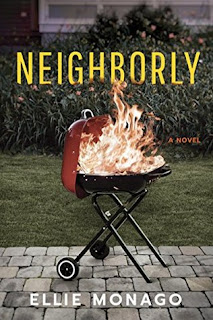 DESCRIPTION:
A not-to-be-missed novel of suspense about the secrets hidden in a young couple’s new neighborhood.

Kat and Doug felt like Aurora Village was the perfect community. Minutes from the city, affluent without pretension, low crime with a friendly vibe—it’s everything Kat never had, and that she’s determined to provide for her infant daughter. Snagging a nice bungalow in this exclusive enclave was worth all the sacrifice. But everything changes overnight when Kat finds a scrawled note outside their front door.

That wasn’t very neighborly of you.

As increasingly sinister and frighteningly personal notes arrive, each one stabs deeper into the heart of Kat’s insecurities, paranoia, and most troubling, her past. When the neighbors who seemed so perfect reveal their open secret, the menace moves beyond mean notes. Someone’s raising the stakes.

As suspicious as she is of every smiling face and as terrified as she’s become of being found out, Kat is still unprepared for the sharp turn that lies just ahead of her on Bayberry Lane.

Kat and Doug have moved into a new neighborhood called Aurora Village. It is certainly a dream come true, even if it cost them every penny they had. From a threatening note found outside their door to deep, rather disturbing secrets, Kat instantly becomes extremely worried. Also, they are the new parents of Sadie and this brings on challenges of its own, including the distance that has developed between Kat and Doug. More than one thing is off-kilter.

Between meeting the neighbors at a block party in their honor, and Kat's and Doug's time with nights' out with their neighbors, secrets begin to surface. All the while notes continue to appear and they progressively become more sinister. Unfortunately, things move beyond the notes, making them, especially, Kat very uncomfortable, if not rather terrified.

Personally, I am an avid user of spreadsheets in my everyday reviewing life. Well, spreadsheets have a major role in this story. A lot of neighborhoods have associations, well, this one tests the extremes of neighborly love. What will Kat and Doug do? No doubt my shock and surprise paled in comparison to what they must've thought.

That is the first half of the story. What happens thereafter in Neighborly is equivalent to a sharp right turn on a curvy road. The story shifts directions and touches on many issues, including Kat's childhood trauma. Not only that the person behind the notes steps up and that scenario is detailed through another perspective. The danger Kat faces is suddenly life-threatening.

How did I read this book in one sitting when I couldn't stand Kat? Granted she had a lot on her plate, but as this story was mostly old in her first-person perspective, readers got to get inside of her head. This left me just a bit nonplussed. But, the author certainly knows how to develop a finely-tuned balance. The story is full of twists and turns, no doubt about that. The conclusion, though...wow! Ellie Monago definitely has a knack for telling stories. As I just read her second book, Confidential, All I can say is that I am duly impressed.

Ellie Monago (not her real name) is the author of the bestselling novel Neighborly. She is also an acclaimed novelist—under her given name—and a practicing therapist. As well as being a wife and mother, Ellie is an avid tennis fan, a passionate reader of both fiction and nonfiction—especially memoirs (because nothing’s as juicy as the truth)—and a firm believer in the restorative value of a good craft cocktail.