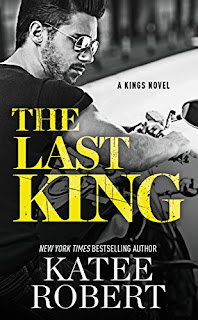 DESCRIPTION:
Ultra wealthy and super powerful, the King family is like royalty in Texas. But who will keep the throne? New York Times bestselling author Katee Robert introduces a red-hot new series.

THE MAN SHE HATES TO LOVE

Beckett King just inherited his father's fortune, his company-and all his enemies. If he's going to stay on top, he needs someone he can trust beside him. And though they've been rivals for years, there's no one he trusts more than Samara Mallick.

The rebel. That's how Samara has always thought of Beckett. And he's absolutely living up to his unpredictable ways when he strides into her office and asks for help. She can't help wondering if it's a legit request or just a ploy to get her into bed. Not that she'd mind either one. After all, she likes to live on the edge too.

But soon the threats to the King empire are mounting, and the two find family secrets darker than they ever imagined and dangerous enough to get them both killed.

Beckett King has the world on his shoulders. Not only has he inherited his father's fortune and company, he also inherited his father's enemies. What is more is that no matter what he intends to get to the bottom of his father's death. Meanwhile, Beckett has another fight on his hands. That fight is with Samara Mallick, his rival and his sometimes lover. How can they, on opposing sides of the same business, but almost together in matters of the heart, find an equal balance?

Samara may truly be drawn to Beckett, sometimes in ways even she doesn't understand, but can she trust him? That is the most important thing, after all. The King family are indeed heads and shoulders above the crowd, but her business is just as compelling, and she is not certain she is ready to give up everything she has worked towards.

Passion is definitely at the forefront in this story. However, danger is present as well. I must admit that it was hard to remain focused on the drama contained within the pages because, in all honesty, I had to skim about the book. I felt that the balance was off a bit.

Katee Robert is new to me, and this just may be her style. Upon completing this book, however, I read The Fearless King, which I did enjoy a bit better. While this was no doubt a romance, there  was also the tension that existed between the two families and this allowed me to wonder what potential could be reached between Samara and Beckett. In addition, there was a lot of drama withing Samara's family that was unfolding. My review for the next book is under separate cover.

Her 2015 title, The Marriage Contract, was a RITA finalist, and RT Book Reviews named it "a compulsively readable book with just the right amount of suspense and tension."  When not writing sexy contemporary and romantic suspense, she spends her time playing imaginary games with her children, driving her husband batty with what-if questions, and planning for the inevitable zombie apocalypse.