Review - A Madness So Discreet 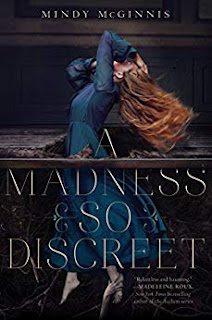 She keeps it locked away, along with her voice, trapped deep inside a brilliant mind that cannot forget horrific family secrets. Those secrets, along with the bulge in her belly, land her in a Boston insane asylum.

When her voice returns in a burst of violence, Grace is banished to the dark cellars, where her mind is discovered by a visiting doctor who dabbles in the new study of criminal psychology. With her keen eyes and sharp memory, Grace will make the perfect assistant at crime scenes. Escaping from Boston to the safety of an ethical Ohio asylum, Grace finds friendship and hope, hints of a life she should have had. But gruesome nights bring Grace and the doctor into the circle of a killer who stalks young women. Grace, continuing to operate under the cloak of madness, must hunt a murderer while she confronts the demons in her own past.

In this beautifully twisted historical thriller, Mindy McGinnis, acclaimed author of Not a Drop to Drink and In a Handful of Dust, explores the fine line between sanity and insanity, good and evil—and the madness that exists in all of us.

Through no fault of her own Grace Mae is trapped in an asylum. She is pregnant with her father's baby and that is the only reason she is there.  She is trapped in another way as well. She will not speak.  Things go from bad to worse for Grace when she finally does speak. Not only does she use her voice, but she acts in a violent manner and is banished to the darkest corners of the asylum, the cellars.

Grace catches the attention of a visiting doctor, Thornhollow. He sees things in Grace that belie the fact that she is crazy, In fact, the doctor can sense her intelligence and is amazed by her incredible memory. There is a killer of young women and Thornhollow has plans to use Grace in order to try and identify the killer. The plan is for Grace to pretend she is out of her mind, all the while hunting the killer. To do this, she is transferred to a much better asylum, one that actually treats patients with a bit more dignity. Meanwhile, Grace is forced to address her past. Perhaps she cannot escape her past but can she escape the clutches of the killer?

As mental hospitals in that day and age were mostly quite horrible, I thought that is what I would be reading of - Grace's survival. Also, with Thornhollow's field of study, phrenology, I again thought that would be the focus, why madness occurs. Instead, A Madness So Discreet played more like a murder mystery. Once that was clearly established, I was able to enjoy the story on a different level. The story had enough twists and turns to maintain my interest, but the conclusion left me less than enthused.

Lastly, there are some trigger warnings. The aforementioned madness, but also incest, rape and suicide, just to name a few. 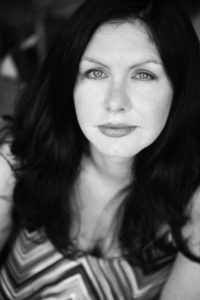 Mindy McGinnis is an Edgar Award-winning novelist who writes across multiple genres, including post-apocalyptic, historical, thriller, contemporary, mystery, and fantasy.

While her settings may change, you can always count on Mindy’s books to deliver grit, truth, and an unflinching look at humanity and the world around us.

Email ThisBlogThis!Share to TwitterShare to FacebookShare to Pinterest
Labels: 4 Stars, historical thriller, YA