Review - A Duke by Default 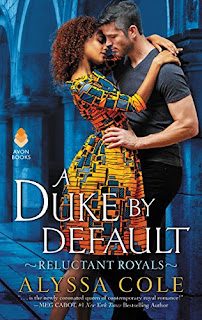 DESCRIPTION:
Award-winning author Alyssa Cole’s Reluctant Royals series continues with a woman on a quest to be the heroine of her own story and the duke in shining armor she rescues along the way

New York City socialite and perpetual hot mess Portia Hobbs is tired of disappointing her family, friends, and—most importantly—herself. An apprenticeship with a struggling swordmaker in Scotland is a chance to use her expertise and discover what she’s capable of. Turns out she excels at aggravating her gruff silver fox boss…when she’s not having inappropriate fantasies about his sexy Scottish burr.

Tavish McKenzie doesn’t need a rich, spoiled American telling him how to run his armory…even if she is infuriatingly good at it. Tav tries to rebuff his apprentice, and his attraction to her, but when Portia accidentally discovers that he’s the secret son of a duke, rough-around-the-edges Tav becomes her newest makeover project.

Forging metal into weapons and armor is one thing, but when desire burns out of control and the media spotlight gets too hot to bear, can a commoner turned duke and his posh apprentice find lasting love?

If you read the first book in the series, you might remember Portia Hobbs to be a bit of a mess. Between her excessive drinking and one-night stands, Portia, a New York City socialite, made a name for herself. Well, things have changed. She has now been sober for months, and she is in Edinburgh Scoland, waiting to be picked up for her new job as a swordmaker's apprentice. As far as she can predict, her life is going to completely changed and she has three months to prove it.

Boy oh boy what has Tavish McKenzie gotten himself into? Not only must he work with the stunning American, she grates his nerves at the outset, as well as making him struggle to hide his intense attraction to her.

Portia does far more than working with weapons and armor, she excels at research. She discovers that Tav is the secret son of a duke and does her best to line him up for the future she is certain he deserves. Tav would rather just rather continue his love of sword training and his altruistic lifestyle. He cares far too much about others and their well-being than to worry about a lofty title.

I might note that Portia is a gorgeous, talented exceptional African American woman, and her finding her way into the heart of a staid Irishman, with half a Chilean heritage, is so very well done. When Tav learns to deal with his new role in life, this fact about Portia is significant, unfortunately, in the eyes of others.

One fun thing about this book, along with the swordplay and the delightful and sexy romance, is the byplay Portia has with her sister and best friend, Ledi, who was the heroine in the first book of the series. Another strong point is that Portia has ADHD and I definitely enjoyed the way it was expertly handled in the story. Among other key features handled in the pages of this remarkable story, we learn that Portia is a very strong women, dealing with difficult parents who don't hesitate to say hurtful things. Yes, her strength is just wonderful.

This is a great read and a fine addition to what promises to be an exceptional series. A Duke by Default is the second book in the Reluctant Royals series. The other books in are A Princess in Theory, Once Ghosted, Twice Shy, (available now), A Prince on Paper  and Can't Escape Love (both available soon).