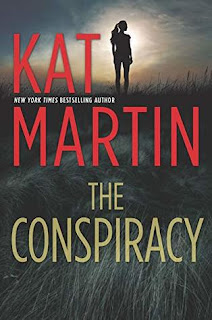 DESCRIPTION:
Harper Winston’s brother has disappeared. Pursuing his dream of sailing the Caribbean, Michael hasn’t responded to texts or emails in days. When even the Coast Guard can’t find him, Harper is forced to take desperate measures. Which means going to Chase Garrett, once her brother’s best friend, now the only man she can trust…or so she hopes.

As the successful owner of Maximum Security, Chase has learned to trust his gut. He knows Harper’s father is mixed up in a deadly business, and suspects there’s more to Michael’s disappearance than meets the eye. Getting involved again with the Winstons goes against everything he stands for, yet old loyalties die hard. As the case draws him closer to Harper and deeper into the Winstons’ snarled crime family, he is forced to put everything on the line to keep Harper safe…and both of them alive.

Harper Winston's brother Michael has disappeared. He was planning to sail the Caribbean but remained in close contact with Harper. After a few days of non-contact, Harper knows something is wrong. However, the Coast Guard cannot find any sign of Michael, so Harper turns to his best friend, Chase Garrett, for help. As Chase is the owner of a firm called Maximum Security, which includes private investigations and the like, he is the perfect man for the job.

Out of respect for his best friend Michael, Chase agrees to help Harper. Despite being good friends, Chase is convinced that Michael's father is involved in criminal activities. From the outset, however, Chase might have to fight his growing attraction to Harper. Chase knows that in no way could anything good come from this, especially since he and her father are at opposite ends of the law.

The danger might have started off with Michael's disappearance, however, both Harper and Chase are in danger as well. This is for very different reasons. The aforementioned danger, as well as intrigue and jaw-dropping action are all backdrops to a story that also includes the developing romance budding between Chase and Harper.

Beyond that, there is the lovely descriptions of the background while Chase and Harper are searching for Michael. If you enjoy reading incredible dramatic and mysterious stories, filled with things such as nonstop action, with the added benefit of an intense romance, then The Conspiracy is the perfect book for you. This is especially so because the story is full of strong characters. Quite naturally, I was drawn to Chase and Harper, but there were others equally compelling. Something important to mention is that Michael was eventually found, but there was a lot of story yet to be told.

This is certainly an engaging read, one that most readers will likely grab a hold of with both hands. I find it utterly exciting that this is the first book in a new series. I definitely look forward to reading much more by the extremely talented Kat Martin and cannot wait to see whose story is next.

Many thanks to Harlequin and to Edelweiss for this ARC to review in exchange for my honest opinion.