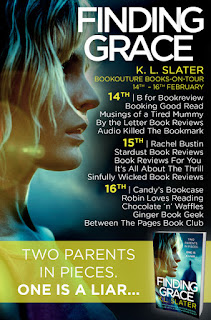 Today is my day on the Blog Tour for Finding Grace by K.L. Slater.

This morning, my daughter sat right here, munching her breakfast, too excited to finish it. Now, she is missing.


The day after her ninth birthday, Lucie and Blake Sullivan agree, for the very first time, to let their daughter, Grace, make the four-minute walk back home alone from a friend’s house just down the street.


They joke with friends about hiding behind bushes to ensure she is safe. But the joke turns sour when Grace does not appear.


Despite the best efforts of the police and local community, Grace seems to have vanished into thin air. With hope fading fast, Lucie knows she can rely on her husband to support her through such dark times. That is until the day she makes a shocking discovery, hidden in Blake’s desk, and suddenly she begins to doubt everything she knew about the man she married.

But Lucie harbours a terrible secret of her own. One that she has never shared with anyone, even Blake …

And as the search for Grace reaches fever pitch, Lucie receives a terrifying message. If she is ever to see Grace again, Lucie has no choice but to face the past she tried hard to bury forever. And she must do it alone.

The most gripping psychological thriller you’ll read this year from the bestselling author K.L. Slater. 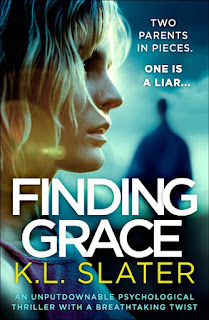 Grace Sullivan just turned nine and has been begging her parents, Lucie and Blake Sullivan, for independence. She begs to walk home from a friend's house. Both Blake and the friend's father agree to each watch her walk partway. It is just down the street, but it is a chance the parents finally agree to take. The one time they allow it, Grace simply disappears.

How tragic! The police find no clues and every search comes up empty. Lucie feels her and Blake are in it together and that he can help keep her strong. She also has the help of her father, especially when it comes to helping to care for her infant during the ordeal. However, Blake seems untrustworthy to Lucie after she finds something huge in his desk. What is he hiding. Is he in any way responsible for Grace's disappearance?

Blake is not the only one with a secret he is dreadfully unwilling to share. Lucie has a secret of her own. A huge one. This could cost her everything. But, she tries to put those terrible concerns aside in the vigorous attempt to discover whatever could have happened to Grace.

Suddenly, Lucie receives a terrifying message. If she does not agree to face her past, she might never see Grace alive again. While hopeful, the past is something that petrifies her. Who can she confide in?

Finding Grace is an engaging book, one that I devoured in one sitting. I found it impossible to put down. I was torn between wanting to know about Grace's whereabouts and Lucie's secrets. The ending was a bit of a surprise and I would never have been able to guess the culprit. I enjoy K.L. Slater and look forward to reaching much more from her. 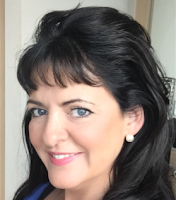 Kim's titles are also published in paperback by Sphere in the UK and Grand Central in the USA.

Before graduating in 2012, she gained literary agent representation and a book deal. As Kim says, ‘it was a fairytale … at the end of a very long road!’