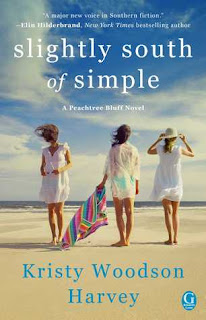 DESCRIPTION:
From the next “major voice in Southern fiction” (New York Times bestselling author Elin Hilderbrand) comes the first in an all-new series chronicling the journeys of three sisters and their mother—and a secret from their past that has the potential to tear them apart and reshape their very definition of what it means to be a family.Caroline Murphy swore she’d never set foot back in the small Southern town of Peachtree Bluff; she was a New York girl born and bred and the worst day of her life was when, in the wake of her father’s death, her mother selfishly forced her to move—during her senior year of high school, no less—back to that hick-infested rat trap where she'd spent her childhood summers. But now that her marriage to a New York high society heir has fallen apart in a very public, very embarrassing fashion, a pregnant Caroline decides to escape the gossipmongers with her nine-year-old daughter and head home to her mother, Ansley.Ansley has always put her three daughters first, especially when she found out that her late husband, despite what he had always promised, left her with next to nothing. Now the proud owner of a charming waterfront design business and finally standing on her own two feet, Ansley welcomes Caroline and her brood back with open arms. But when her second daughter Sloane, whose military husband is overseas, and youngest daughter and successful actress Emerson join the fray, Ansley begins to feel like the piece of herself she had finally found might be slipping from her grasp. Even more discomfiting, when someone from her past reappears in Ansley's life, the secret she’s harbored from her daughters their entire lives might finally be forced into the open.
Exploring the powerful bonds between sisters and mothers and daughters, this engaging novel is filled with Southern charm, emotional drama, and plenty of heart

This remarkable book chronicles the tales of Ansley and her three daughters. The story begins as Ansley is contacted by her daughters, all needing her right now. Oldest daughter Caroline is in a bad way. For starters, going back to Peachtree Bluff is something Caroline said swore she’d never do. However, she is in desperate need.  A very pregnant Caroline and her nine-year old daughter arrive at her mother’s house as her husband has been had been discovered having an affair with a supermodel. That fact, and also because  her husband James comes from New York money, the gossip is unrelenting.

Then Ansley’s daughter Sloane is having a bit of a hard time with her two young sons as her husband is currently deployed overseas. Then there is Emerson, a successful actress who, too, needs to be with her mother. It might be just for the summer, but, can the three sisters get along as adults, and will all of their lives be made for the better now?

Ansley certainly has her own woes.  As a widow for sixteen years she has gotten along pretty well.  For starters, she has grown a very successful design business, especially after discovering that her husband left her with little bit of nothing. Despite her success, her life is beginning to feel a bit unsettled. Then, a someone from her past, Jack, reenters her life. Ansley has no choice but to closely examine her past and the difficult decisions she made over the years. Now Ansley has her future to face. Will she choose her own happiness over her daughters’ needs?

Simply South of Simple is a very warm and affecting story. I was enthralled with all of the drama and the pages couldn’t turn fast enough. I both laughed and cried while reading this book.  I shared the sadness as well as the joy each woman experienced and read this book in just one sitting. I have already devoured the second book in the series as well, The Secret to Southern Charm, which was just as good. The Southern Side of Paradise follows in May, but as I already have it, I will be reading it soon.