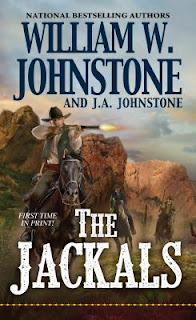 FATE BROUGHT THEM TOGETHER.
IT MAY ALSO SEND THEM STRAIGHT TO HELL.

Alone, these justice fighters are dangerous enough. Together they're a wild bunch known as the Jackals. Now, national bestselling authors William W. and J.A. Johnstone are turning them loose . . .

With Apaches on the prod, ex-cavalry sergeant Sean Keegan, bounty hunter Jed Breen, and ex-Texas Ranger Matt McCulloch take shelter in a West Texas way station--along with a hot-as-a-pistol female bound for the gallows, a spiteful newspaper editor, and a coward with $50,000 who promises them five grand if they'll deliver his blood-soaked stash to his wife.

Turns out, Indians might be the least of the problems for the trio, soon to be known as the Jackals. The loot's stolen property of the vengeful Hawkin gang, and these prairie rats are merciless, stone-cold killers. And the brother of the man the woman killed wants to butcher her himself rather than watch her swing. McCulloch, Keegan, and Breen are ready for a showdown--but the Jackals may not live to spend that $5,000.

Three justice fighters work very hard, singularly and then together when it comes to a hair-raising opportunity. The three include an ex-Texas Ranger, Matt McCulloch, bounty hunter Jed Breen and an ex-cavalry sergeant Sean Keegan. The three definitely make an unlikely trio, but the danger they face is real, so they must work together.

Facing Apaches and a spiteful group of bandits led by Jake Hawkin are keeping them busy. Lots of shooting going on. After all, it is the Old West. After taking shelter in a stagecoach station, one of the people they run into is a man with $50,000 cash he had in his possession. The man offers the Jackals $5,000 cash if they will deliver the bundle to his wife.

The aforementioned Hawkin gang just might be more dangerous to the Jackals than the Apaches. The $50,000 was their stolen cash. They will mow down anyone in their path to get their money back. Will the three men live long enough to claim the reward? The danger is ever present as it seems the small group are on their own without any help from other sources.

This is my first ever western fiction read. The story was full of action and it put in mind the many westerns I watched while I was growing up. It was a terrific story, very descriptive and well-told, and I eagerly turned pages with bated breath to see if they would survive and end up with the reward. Although I have never read anything by William W. Johnstone, I admit to being thoroughly impressed that he has penned over 300 books. J A. Johnstone is the nephew of the prolific author. They have co-authored several books together. I look forward to my next adventure by this pair. 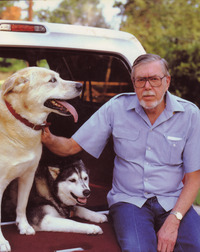 William W. Johnstone was born in Southern Missouri, the youngest of four children. Raised with strong moral and family values by his minister father, and well-tutored by his school teacher mother, Bill quit school when he was fifteen. He was kicked out of the French Foreign Legion for being under age and joined the carnival. But still valuing his education, he returned home to finish his high school education in 1957.He went on to work as a deputy sheriff, did a hitch in the army, and began a career in radio broadcasting, where he worked daily on his verbal and storytelling skills for the next sixteen years on the air. Much of his knowledge of the early frontier began from listening to family experiences told to him by his Grandparents.

His love of animals is displayed in many of his books as well as finding several Huskies and Malamutes roaming freely around his home. As an avid gun and knife collector, hours of research are devoted to the types of weapons commonly used during the eras of his writings

One little known fact, is his love for music … from “rockabilly to classical”. Bill has written and recorded several songs which may be released for his fans in the future.

He started writing in 1970, but it wasn’t until late 1979 when The Devil’s Kiss was published that William W. Johnstone became a full-time writer. Since that time he has written over two hundred books in a variety of genres including action, suspense, western, science fiction, and horror. Two of his books, Eagle Down and Dagger, were written under the pen name of William Mason.

To the true William W. Johnstone reader, he is a best-selling author admired for the great diversity in his writing talents. Though most known for his western adventures, Johnstone was also a visionary writer. His prophetic stories within his Ashes Series, Code Name Series, and his science fiction books, predicting the Gulf War and the political climate we live in today, was ahead of its time when it was written.

Being the all around assistant, typist, researcher, and fact checker to one of the most popular western authors of all time, JA Johnstone learned from the master, Uncle William W. Johnstone.

Bill, as he preferred to be called, began tutoring JA at an early age. After-school hours were often spent retyping manuscripts or researching his massive American Western History library as well as the more modern wars and conflicts. JA worked hard--and learned.

"Every day with Bill was an adventure story in itself. Bill taught me all he could about the art of storytelling and creating believable characters. 'Keep the historical facts accurate,' he would say. 'Remember the readers, and as your grandfather once told me, I am telling you now: be the best J.A. Johnstone you can be.'"