Review - Wish You Were Here 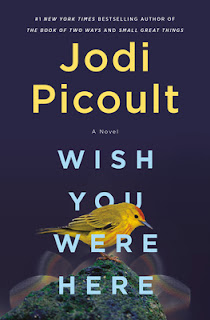 Title:  Wish You Were Here
Author:  Jodi Picoult
Publisher:  Ballantine Books
Genre:   Women's Fiction
Format:  Kindle ARC
No. of Pages:   336
Date of Publication:   November 30, 2021
My Rating:   5 Stars
DESCRIPTION:
From the #1 New York Times bestselling author comes a deeply moving novel about the resilience of the human spirit in a moment of crisis.
Diana O’Toole is perfectly on track. She will be married by thirty, done having kids by thirty-five, and move out to the New York City suburbs, all while climbing the professional ladder in the cutthroat art auction world. She’s not engaged just yet, but she knows her boyfriend, Finn, a surgical resident, is about to propose on their romantic getaway to the Galápagos—days before her thirtieth birthday. Right on time.
But then a virus that felt worlds away has appeared in the city, and on the eve of their departure, Finn breaks the news: It’s all hands on deck at the hospital. He has to stay behind. You should still go, he assures her, since it would be a shame for all of their nonrefundable trip to go to waste. And so, reluctantly, she goes.
Almost immediately, Diana’s dream vacation goes awry. The whole island is now under quarantine, and she is stranded until the borders reopen. Completely isolated, she must venture beyond her comfort zone. Slowly, she carves out a connection with a local family when a teenager with a secret opens up to Diana, despite her father’s suspicion of outsiders.
Diana finds herself examining her relationships, her choices, and herself—and wondering if when she goes home, she too will have evolved into someone completely different.
Link to purchase the book
MY THOUGHTS:
Diana O'Toole is very excited for a planned vacation with her boyfriend Finn. Diana lives life by rote and she thinks it is high time for Finn to propose. Galápagos is the destination and it should be utterly romantic. However, at the very last moment, due to the pandemic Finn tells Diana that he simply cannot get away. He is a surgical resident and is desperately needed as a front line doctor. Finn and Diana put a lot of money into the trip so he tells Diana that she should go anyway.
Despite her reservations, Diana goes on the getaway, only to find herself stranded. The borders are closed out of necessity and now Diana must stay away. Diana befriends a family, most notably a teen in need of a connection. All the while Diana is dealing with life's priorities, including her relationship with Finn.
Wish You Were Here is a stellar book. A book that made me think. Ms. Picoult has a twist that I was not expecting, thus making this book an utterly compelling read. In fact, due to the times that are still so uncertain, I was a bit worried about how I would handle this book. This thrilling book is completely thought-provoking and relatable, and most definitely impossble to put down.

Many thanks to Ballantine Books and to NetGalley for this ARC for review. This is my honest opinion.

Jodi Picoult is the author of twenty-six novels, including the #1 New York Times bestsellers Small Great Things, A Spark of Light, Leaving Time, The Storyteller, Lone Wolf, Between the Lines, Sing You Home, House Rules, Handle with Care, Change of Heart, Nineteen Minutes, and My Sister’s Keeper. She lives in New Hampshire with her husband and three children.
Her new novel, THE BOOK OF TWO WAYS, is available in hardcover, ebook, and audio on September 22nd.
web | twitter | facebook | instagram