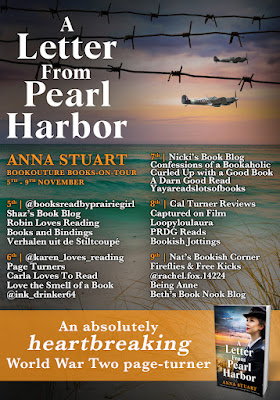 Ninety-eight-year-old Ginny McAllister’s last wish is for her granddaughter to complete a treasure hunt containing clues to her past. Clues that reveal her life as one of the first female pilots at Pearl Harbor, and a devastating World War Two secret.

1941, Pearl Harbor: On the morning of December 7th, Ginny is flying her little yellow plane above the sparkling seas when she spots an unknown aircraft closing in on her. She recognises the red symbol of the Japanese fighter planes almost too late. Somehow, she manages to land unscathed but the choices she is forced to make in the terrible hours that follow have tragic consequences…

2019, Pearl Harbor: Heartbroken Robyn Harris is reeling from the death of the strong, determined grandmother who raised her. Her only comfort is a letter written in Ginny’s distinctive hand which details a treasure hunt, just like the ones she used to set for her as a little girl. Except this time, the clues are scattered across the beautiful island of Hawaii. Despite her grief, Robyn finds herself intrigued as she follows the trail of letters, revealing the truth about Ginny’s service during the Second World War.

Inspired by true events, this is a heartbreaking and unforgettable WW2 novel about love, loss and bravery. Perfect for fans of The Alice Network, The Nightingale and Kathryn Hughes.

Listen to a sample here:
https://bit.ly/3BijWnz
MY THOUGHTS: 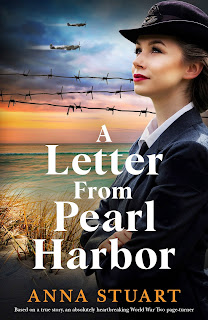 Title:   A Letter from Pearl Harbor
Author:  Anna Stewart
Publisher:  Bookouture
Genre:   Historical Fiction
Narrator:  Laurence Bouvard
Format:  Kindle and Audiobook ARC
No. of Pages:   363
Date of Publication:   November 5, 2021
My Rating:   5 Stars
Robyn heads to England just before her grandmother dies. Seeing her sister Ashleigh is not easy for her. The two were once close but have become distant since Ashleigh had a bicycle accident that left her in a wheelchair. When they were children, their grandmother set up quite a few treasure hunts and the sisters really enjoyed them. The last wish of their grandmother means that Ashleigh must accompany Robyn to her home in Hawaii for one last treasure hunt. Challenges abound but the sisters follow through and with a series of letters and clues they work together as their grandmother had requested.
Soon Robyn and Ashleigh learn that their grandmother had a secret for years and they slowly learn about their grandmother's life and time during World War II. Not only do the sisters have a lot to learn about their grandmother, they have a lot to learn about each other. In fact, the time they spend together affords them the opportunity to grow closer together again. They stumble along and do not always agree, but they have a remarkable time together.
This was an excellent book from beginning to end. I had this review copy as an audiobook ARC and it was masterfully narrated by Laurence Bouvard. Her voices were marvelous, especially when we heard Grandmother Ginny's voice during the letters the girls were reading. As this story was delivered, the sisters lives were evolving, but we also got to see parts of Ginny's life during the war. Her experiences were amazing and it was wonderful to watch the sisters learn so much about her life at that time.
The settings in this book were well done, made even better as we learn about female pilots during WWII. This story had a wonderful impact on me, but that grew even stronger when reading the Acknowledgments at the end of the book. The fact that this was based on a true story was so very impressive.
Many thanks to Bookouture and to NetGalley for this ARC for review. This is my honest opinion.
ABOUT THE AUTHOR:

Anna Stuart lives in Derbyshire with her campervan-mad husband, two hungry teenagers and a slightly loopy dog. She was hooked on books from the moment she first opened one in her cot so is thrilled to now have several of her own to her name. Having studied English literature at Cambridge university, she took an enjoyable temporary trip into the ‘real world’ as a factory planner, before returning to her first love and becoming an author. History has also always fascinated her. Living in an old house with a stone fireplace, she often wonders who sat around it before her and is intrigued by how actively the past is woven into the present, something she likes to explore in her novels. Anna loves the way that writing lets her ‘try on’ so many different lives, but her favourite part of the job is undoubtedly hearing from readers. You can reach her on Facebook @annastuartauthor or Twitter @annastuartbooks.