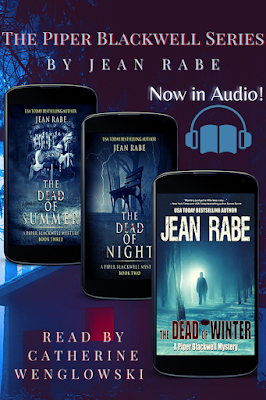 Set in a small town in Indiana, Piper Blackwell is the newly appointed sheriff in this intense mystery thriller series from Faust lifetime achievement winner, Jean Rabe. Narrator Catherine Wenglowski lends her voice to this series of books that will keep you up at night...

DEAD OF WINTER, DEAD OF NIGHT, and now, DEAD OF SUMMER, have been converted into ear candy (or, audiobooks) for your listening enjoyment.

In a deceptively peaceful county, a murderer hides in plain sight.
Fifty-eight minutes into her first day on the job, 23-year-old Sheriff Piper Blackwell is faced with a grisly murder, the victim artfully posed amid decorations on his lawn. Drawing on former military training, Piper must prove herself worthy of the sheriff's badge, and that won't be easy.
Genre: Mystery/Thriller
Length: 8 hr 47 min
Language: English
Buy Link: https://www.amazon.com/The-Dead-of-Winter-Jean-Rabe-audiobook/dp/B06ZXTG836

MY THOUGHTS:
Twenty-three years old and a sheriff. The first day on the job and Piper Blackwell is faced with a brutal murder. Five years with the military left her with grit so she is more than ready to deal with this job. Meanwhile, her father was the previous sheriff, and had to resign due to health issues. Piper hopes she lives up the badge. There is someone that tries to get into Piper's way, and that is Chief Deputy Oren Rosenburg. He lost the election for the sheriff and is not happy about it, even getting in the way of the investigation. Piper strives to remain focused, especially with her concern for her ailing father. She does her best to find the killer.
What a way to introduce a new series and a new main character. Piper is a wonderful example that proves that youth does not always weigh against experience and wisdom. In fact, her age fades into the background as she digs deeper in the case at hand. Sadly, the murder is only the first one Piper is working on, as the killer strikes more than once.
I had the opportunty to listen to this excellent story as it was delightfuly narrated by Catherine Wenglowski. In fact, I was able to listen to all three books in the series. This was sort of like binge watching a television series. I sat back and listened to these great stories, even though the seriousness of murder was the focus.
Many thanks to Boone Street Press, Piper Blackwell and Psst...Promotions for this ARC for review. This is my honest opinion.
- - - - -
DEAD OF NIGHT
As Sheriff Piper Blackwell rushes to a clandestine meeting with an aging, paranoid veteran who believes spies are trailing his every move, she is caught in a fierce thunderstorm. Pounding rain drums against the bluff, washing away the earth and revealing a grisly secret someone tried to bury a long time ago.
Putting a name to the skeleton on the bluff, and searching for the thief who robbed the old veteran of his life’s earnings, sends Piper delving into the sleepy towns that dot her rural county. Now she’s digging into pasts perhaps best left alone.
Accompanied by Chief Deputy Oren Rosenberg, Piper seeks to expose a truth someone wants to remain forever hidden. The investigation may have started with a thunderstorm, but Piper aims to finish it and find justice. Uncovering fragments of Spencer County’s history could prove more dangerous - and deadlier - than she ever expected.
Genre: Mystery/Thriller
Length: 8 hr 32 min
Language: English
Buy Link: https://www.amazon.com/Dead-Night-Piper-Blackwell-Mystery/dp/B08Q9SFKNY/

MY THOUGHTS:
Piper Blackwell may only be twenty-three years old, but she has proved that she is worthy as the Sheriff of the town she lives in. Presently, she finds herself caught in a storm and runs into a veteran in his nineties and tells her that he is being watched by spies. He only wants to speak to Piper. Spies? Is this possible? Well the man tells her that since they have the military in common she is the perfect one   the only one - to get to the bottom of things.
Soon a skeleton is found, as the dirt had been washed away due to the incredible rain. Is the skeleton that was found connected to the fact that the octogenarian tells Piper that he had been robbed of everything he had? He tells Piper about how well he had hidden his stash but it was found anyway. He insists that there is a conspiracy and he demands that she fixes things for him.
Will Piper be able to get to the bottom of things, especially when she must work with her nemesis Chief Deputy Owen Rosenberg? Only four months on the job, but Piper plows ahead anyway. It soon becomes evident that the past just might need to remain the past - at least that is how someone wants things.
What another thrilling book in the Piper Blackwell Mystery series. I love Piper, especially her age and how she doesn't let that slow her down one bit. Proving her worth is no easy task for her, but she does her darndest to prove that she deserves to be Sheriff even when things look very uncertain.
This terrific story was the second Audible book that I have enjoyed. I loved the narration as much as I did with the first novel, and also the third book, The Dead of Summer.
Many thanks to Boone Street Press, Piper Blackwell and Psst...Promotions for this ARC for review. This is my honest opinion.
- - - - -
DEAD OF SUMMER
Shouts of delight turn to screams of terror when a carnival ride goes berserk at the Spencer County Fair. Sheriff Piper Blackwell must contain the chaos and investigate the possible sabotage, even as she tries to solve a local businessman’s horrific murder.
But managing two investigations with at least one killer on the loose pushes the young officer and her tiny staff to their limits. Can Piper catch the murderer, or will the summer’s body count continue to rise?
Genre: Mystery/Thriller
Length: 8hr 19 min
Language: English
Buy Link: https://www.amazon.com/Dead-Summer-Piper-Blackwell-Mystery/dp/B094M1NCKF/

MY THOUGHTS:
From a carnival ride gone terribly wrong to the murder of a local businessman's murder, Sheriff Piper Blackwell most certainly has her hands full. Case after case comes into her purview and she proves herself time after as she manages to solve the most difficult cases. Both cases are a priority for Piper and she most certainly has proved that her age as a woman not yet twenty-five hasn't slow her down one bit.
Factor in two things in this third book in a fabulous series - the excellent writing and the perfect narration as I listened to the Audible audiobook. I was completely pulled into all three books in this series and each book, including this one, were wonderful reads. I was completely pulled into the stories and find Piper to be a great character.
There is a fourth book in this series, The Dead of Jerusalem Ridge, and I am adding it to my TBR. I do hope that the series will continue as I would love to read more of Piper and her experiences.
Many thanks to Boone Street Press, Piper Blackwell and Psst...Promotions for this ARC for review. This is my honest opinion.
- - - - -
Please enjoy the following excerpt:
Love the Piper Blackwell Series and want to keep up with Jean's latest works? Sign-up for her newsletter: https://jeanrabe.com/sign-up-for-my-newsletter/ and follow her on Amazon: http://author.to/JeanRabe. 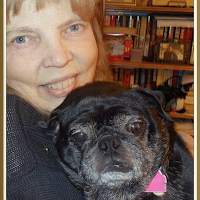 USA Today best-seller, Jean Rabe's impressive writing career spans decades, starting as a newspaper reporter and bureau chief.
From there she went on to become the director of RPGA, a co-editor with Martin H. Greenberg for DAW books, and, most notably, Rabe is an award-winning author of more than forty science fiction/fantasy and murder mystery thrillers.
She writes mysteries and fantasies, because life is too short to be limited to one genre--and she does it with dogs tangled at her feet, because life is too short not to be covered in fur.
Find out more about her at www.jeanrabe.com 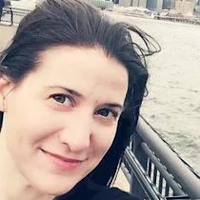 Catherine Wenglowski is a New York City based audiobook narrator. With a background in theater and as a classically trained singer, combined with her lifelong love of reading, Catherine uses her trained ear and creativity to add breath and life to characters and to connect with her audience. Visit her website at: https:/www.wenglowvo.com/
Posted by Robin Loves Reading at 11/21/2021 02:44:00 PM