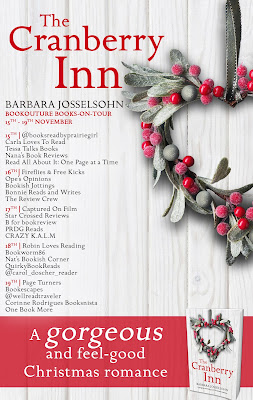 DESCRIPTION:
An unputdownable, feel-good Christmas romance about fresh starts, the importance of family and learning how to follow your heart. Perfect for fans of Mary Alice Monroe, Rachel Hanna and Carolyn Brown.

As twinkling lights go up and snowflakes begin to fall, Laurel Hanover and her eight-year-old son are going home to the Cranberry Inn in the heart of the Adirondack Mountains. Laurel can’t wait to leave New York behind to help her father run the family business, and make snow angels with her son, even if it’s just for Christmas. But when she walks through the door, she’s shocked to find the inn in disrepair, and a letter saying her father will be gone until Christmas Eve…

No one in town knows where Laurel’s father is, and she doesn’t know whether to be worried or angry – but she won’t let the inn go under, and nothing will get in the way of the perfect Christmas for her son. Seeing the worn-out wooden bannisters, bare of festive lights, she immediately recruits her childhood friend, brooding local carpenter Joel Hutcherson. They might disagree on whether any walls actually need to come down, but each rip in the carpet makes Laurel more concerned for her father, and Joel is a welcome distraction. And when he admits that Laurel was his first crush, she realises she’s falling for him.

But then Laurel uncovers a card with beautiful, ornate writing amongst her father’s things and learns the real reason he disappeared. And it changes everything. Worse still, she thinks Joel knew the truth all along.

Laurel thought this was going to be the perfect Christmas – that maybe she had found her happy. But now there’s nothing to stop her from running back to New York the moment the baubles come down… is there? 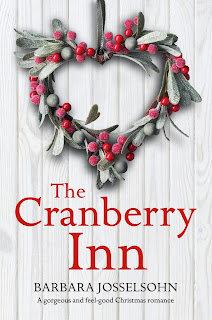 Title:   The Cranberry Inn
Author:  Barbara Josselsohn
Series:   Lake Summers #4
Publisher:  Bookouture
Genre:   Women’s Fiction; Romance
Format:  Kindle ARC
No. of Pages:   257
Date of Publication:   November 15, 2021
My Rating:   5 Stars
Laurel Hanover immediately responds to her father’s plea for assistance with the inn her family had run for decades. Quite naturally, she is very concerned when she finds the inn completely empty when she and her son arrive after a long drive from New York. She had always enjoyed living at the inn in the Adirondack mountains despite a somewhat troubled past where she found fitting in with her family to be more than difficult. But, the inn is empty. No guests. And a father is nowhere to be found. All she finds is a note saying that he will be back on Christmas Eve with a surprise.
Beyond the inn being empty, Laurel finds it in disrepair. When her mother was alive she did everything she could to keep it in beautiful and full of guests. When Laurel discovers that childhood friend Joel Hutcherson is also in town, she accepts his offer of help to make some repairs. Joel is an accomplished carpenter who has been living overseas for years. There is an air of mystery about Joel and her father that Laurel wants to uncover. More than that, it doesn’t take her long to realize that the crush she had on him in high school is coming back in full force.
Where is her father? Why doesn’t anyone in town seem to know where he has gone, and this includes Joel? What about her growing feelings for Joel? He is leaving and she has to get back to New York with her son. They can be no the future between them so how could she let any feelings go beyond that of friendship?
Despite the inn having been empty, she gets a request for one guest for the entire month. His name is Christopher and Laurel intends on doing the job her mother would have when she ran the inn. While she strives to update the inn and serve as a good host, Joel has his own worries. He recently lost his mother and has a lot of decisions to make regarding the shop that she ran and the impact that the shop had on the members of the town.
In this tender story of second chances Laurel and Joel slowly begin to explore their feelings despite the different paths their lives have taken. As her concern for her father never lets up, Laurel also worries about her son and his happiness. The story kept me invested from the very beginning with wonderful characters, a slowly brooding love story and often emotional moments.
Many thanks to Bookouture and to NetGalley for this ARC for review. This is my honest opinion.
ABOUT THE AUTHOR:

Barbara Josselsohn is an award-winning journalist and novelist who loves crafting stories about strong protagonists facing a fork in the road. Her novels center around second chances, family relationships and, of course, romance. She is the author of the Lake Summers series set in the fictional town of Lake Summers, nestled in the Adirondacks Mountains, which includes the books The Lilac House and The Bluebell Girls. Before joining with Bookouture, she published The Last Dreamer, a women’s-fiction novel from Lake Union Publishing, along with hundreds of articles and essays in major and regional publications about family, home and relationships. She lives just north of New York City and enjoys escaping to the beach or the mountains whenever she can. Other than writing, her biggest passion is her family: husband, her three kids, and her indefatigable shih-poo!