Review - My Mother, Munchausen's and Me 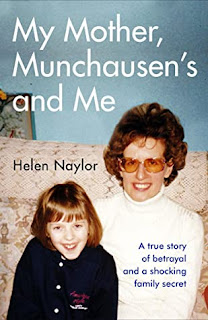 Title:   My Mother, Munchausen's and Me
Author:  Helen Naylor
Publisher:  Thread
Genre:   Memoir
Format:  Kindle ARC
No. of Pages:   276
Date of Publication:   November 25, 2021
My Rating:   5 Stars
DESCRIPTION:
There was a time when I loved my mother. It’s shocking to imply that I stopped loving my mum because mothers always love their children and always do their best for them. Mothers are supposed to be good. But my mother wasn’t good.
Ten years ago, Helen Naylor discovered her mother, Elinor, had been faking debilitating illnesses for thirty years. After Elinor’s self-induced death, Helen found her diaries, which Elinor wrote daily for over fifty years. The diaries reveal not only the inner workings of Elinor’s twisted mind and self-delusion, but also shocking revelations about Helen’s childhood.
Everything Helen knew about herself and her upbringing was founded on a lie. The unexplained accidents and days spent entirely on her own as a little girl, imagining herself climbing into the loft and disappearing into a different world, tell a story of neglect. As a teenager, her mother’s advice to Helen on her body and mental health speaks of dangerous manipulation.
With Elinor’s behaviour becoming increasingly destructive, and Helen now herself a mother, she was left with a stark choice: to collude with Elinor’s lies or be accused of abandoning her.
My Mother, Munchausen’s and Me is a heart-breaking, honest and brave account of a daughter unravelling the truth about her mother and herself. It’s a story of a stolen childhood, mental illness, and the redemptive power of breaking a complex and toxic bond.
Link to purchase the book.
MY THOUGHTS:
I have heard quite a bit about Munchausen's by Proxy over the years, but not much about Munchausen's itself. In this memoir by Helen Naylor, we learn how her mother's decades of fake illnesses finally led to her death, and how this all had a devastating effect on Helen.
Elinor's illnesses were self-manufactured. But she kept diaries. Dozens and dozens of them over the course of fifty years. As Helen begins reading these diaries she learns so much about her mother, but even about herself as well.
Helen's life was tragic. Her mother was always ill in bed, leaving Helen to fend for herself for days at a time. This was when she was a young child. As a teenager, things became much worse for Helen. As an adult, Helen began reading these diaries and is more than determined never to ever become like her mother. She also learns what love is and how it is an unbreakable bond, even as she survived a tragic past.
I had this book review in audiobook format, and it was narrated by the author. Listening to this book had quite an impact on me. This was no easy book to read or listen to, especially because things were so tragic. Sometimes Helen read the journal entries in order, sometimes randomnly. In either case, they were more than disturbing. Now Helen herself is a mother, and she wants never to repeat her mother's mistakes. More than that, as a reader I often felt as if I were absorbing the same words that Helen was reading, and wondering what it would have been like to be in her shoes, especially when she was a child.
Many thanks to Thread and to NetGalley for this ARC for review. This is my honest opinion.
ABOUT THE AUTHOR:
My writing career started with the production of The Flower that Couldn’t Grow, written (with help) when I was three. Although I continued writing as a hobby, it wasn’t until I began my memoir about growing up with a mother who faked illnesses and had narcissistic personality traits that I was encouraged to pursue writing professionally.
I live in Nottingham with my husband, two children and cat, and enjoy playing guitar, drinking good coffee and cycling - but not all at the same time.
web