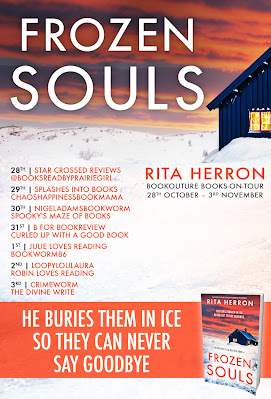 DESCRIPTION:
She looked like an angel. She lay perfectly still, silky blonde hair falling to her pale shoulders. Icicles clung to her eyelashes as snowflakes fluttered to the frozen ground, burying her body.

As a snowstorm wreaks havoc in the mountain town of Crooked Creek, a woman is found buried in ice. Detective Ellie Reeves is first on the scene. Examining the body, she finds frozen blonde hair, pink nail polish and a silver heart necklace engraved with Mine Forever.

Ellie has first-hand experience of the monsters that lurk in the mountains––her childhood is testament to that. She vows to catch this one, but she’s up against the brutal weather, with snow covering footprints and making forensics impossible.

Frantically trawling through missing-person’s reports, Ellie identifies the victim. Nadine Houser disappeared eleven years ago. Where has she been all this time? Why was she only murdered now?

As storm clouds roll in, another girl is reported missing. Ellie retraces the steps of Ginger Weston who was renting a cabin in the mountains. She discovers a gold chain in the snow, spotted with blood. The killer is accelerating, and it’s just a matter of time before more innocent lives are robbed.

With the town blaming Ellie for the missing girl on her watch, and everyone fearing for their safety of their daughters, it’s down to Ellie to solve the toughest case of her career. But when the killer comes after her, will she live to save Crooked Creek from its ruthless monster?

A totally gripping read that will get your pulse pounding as you flip through the pages! Perfect for fans of Lisa Regan, Melinda Leigh and Kendra Elliot who love a roller-coaster, twist-packed page-turner! 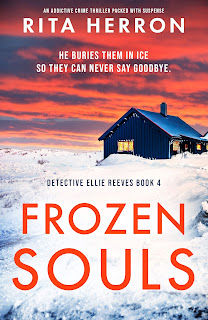 Title:   Frozen Souls
Author:  Rita Herron
Series:  Detective Ellie Reeves #4
Publisher:  Bookouture
Genre:   Mystery & Thrillers
Format:  Kindle ARC
No. of Pages:   449
Date of Publication:   October 28, 2021
My Rating:   4 Stars
Detective Ellie Reeves is fighting weather that just might prove inclement. Discovering a woman's body in the ice is very disturbing to Ellie. She peruses the records and discovers that the victim had been missing for years. Where was she during those years and why was she so brutally killed recently? Then another woman goes missing. Ellie and her team are really worried for Ginger Weston, the governor's daughter. He tells Ellie that his daughter was away for a while in the mountains and that he stopped hearing from her. Soon they realize that she was kidnapped and the hunt is on.
Ellie feverishly looks for Ginger, turning over every stone. She senses something about the person responsible for the previous murder and she worries that time just might run out for Ginger. Meanwhile, Ginger is facing her abductor. Her fear is real and there are some chapters in this book that display his actions towards his victims. Plotting her escape seems impossible to Ginger, but she struggles to remain hopeful.
While searching, Ellie faces problems at work and with this difficult case, she refuses to give up. The kidnapper is a monster to Ellie, and with very good reason. Ellie cannot help but think of difficult times in her own life, but still she soldiers on, even to the point of placing her own life in danger.
Although Frozen Souls is the fourth  book in the series it did quite well as standalone novel. Ellie is exceptional and I look forward to reading more of her in future installments, and I would also love to see where things go with another cop, Derrick, who worked alongside her on this case. This was a thrilling story that I devoured from beginning to end in one sitting.
Many thanks to Bookouture and to NetGalley for this ARC for review. This is my honest opinion.
ABOUT THE AUTHOR:

USA Today Bestselling and award-winning author Rita Herron fell in love with books at the ripe age of eight when she read her first Trixie Belden mystery. But she didn't think real people grew up to be writers, so she became a teacher instead. Now she writes so she doesn't have to get a real job.

With over ninety books to her credit, she's penned romantic suspense, romantic comedy, and YA novels, but she especially likes writing dark romantic suspense and crime fiction set in small southern towns.

For more on Rita and her titles, visit her at www.ritaherron.com. You can also find her on Facebook/ritaherron.com and Twitter @ritaherron.