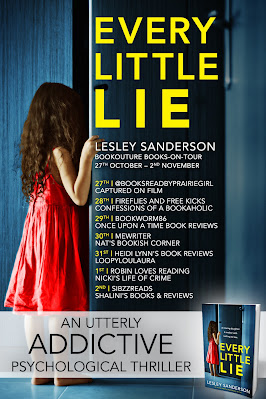 DESCRIPTION:
Lie #1 was to my new friends, about why I moved here.
Lie #2 was to my husband, about who I was before I met him.
Lie #3 was to myself, that I would get away with what I’ve done.

When I met Seb, it was like everything fell into place. My daughter Evie finally had a proper dad, and I had found the husband of my dreams – and what Seb didn’t know about my past wouldn’t hurt him.

But lately he’s been acting strangely. He won’t look me in the eye, he keeps coming home late and the other day at the school fair I saw him arguing with an unknown woman – the same woman I’ve seen hanging around outside our house.

And just as I start wondering whether I’m not the only one with a secret, Evie goes missing…

An edge-of-your-seat psychological thriller with a jaw-dropping twist, perfect for fans of K.L. Slater, T.M. Logan and Lisa Jewell. 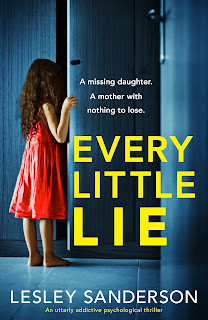 Title:   Every Little Lie
Author:  Lesley Sanderson
Publisher:  Bookouture
Genre:   Psychological Thriller
Format:  Kindle ARC
No. of Pages:   270
Date of Publication:   October 27, 2021
My Rating:   4 Stars
Anna wasn’t sure she would ever marry, but she did marry Seb, even trusting her with her daughter Evie. Beyond Seb, Anna doesn’t trust anyone else, not even Seb’s mother Marion. She walks Evie to and from school every day and keeps a very, very close eye on her.
At some point someone begins watching them. Each of them, Anna, Seb, and even Evie, notices a frequent stranger. What is more is Anna begins receiving disturbing phone calls. Why won’t they go to the police? Could it be that Anna has secrets that she does not want to be revealed? Someone is more than aware of lies that have been told and they are sure to upset the balance that Anna has found in her little family.
Terrifyingly, Evie is eventually kidnapped. Certainly this would be time for Anna to go to the police. What is the threat that she is facing that gives her pause? Can Anna stop what is happening and get her precious little girl back or will her past finally catch up with her?
While Anna‘s love for her daughter was clear to see, the story showed that secrets and lies can ruin the best of intentions. As much as I loved the story, the ending did throw me off. Nonetheless, this was a riveting story that clearly demonstrated the power of love.
Many thanks to Bookouture and to NetGalley for this ARC for review. This is my honest opinion.
ABOUT THE AUTHOR:

Lesley Sanderson spends her days writing in coffee shops in Kings Cross where she lives and also works as a librarian in a multicultural school. She has lived and worked in Paris and speaks four languages.

She attended the Curtis Brown Creative novel writing course in 2015/6, and in 2017 was shortlisted for the Lucy Cavendish fiction prize.

Lesley discovered Patricia Highsmith as a teenager and has since been hooked on psychological thrillers. She is particularly interested in the psychology of female relationships.