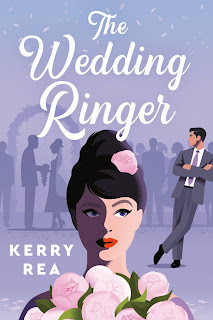 Title:   The Wedding Ringer
Author:  Kerry Rea
Publisher:  Berkley Books
Genre:  Romance
Format:  Kindle ARC
No. of Pages:   368
Date of Publication:   November 9, 2021
My Rating:   4 Stars
DESCRIPTION:
A woman who wants nothing to do with love or friendship finds both in the unlikeliest ways in this hilarious and heartwarming debut by Kerry Rea.

Once upon a time, Willa Callister was a successful blogger with a good credit score, actual hobbies, and legs that she shaved more than once a month. But after finding her fiancé in bed with her best friend, she now spends her days performing at children's birthday parties in a ball gown that makes her look like a walking bottle of Pepto Bismol. Willa dreams of starting fresh, where no one knows who she used to be, but first she needs to save up enough money to make it happen.

Maisie Mitchell needs something too: another bridesmaid for her wedding. After a chance encounter at a coffee shop, Maisie offers to pay Willa to be in her bridal party. Willa wants nothing to do with weddings—or Maisie—but the money will give her the freedom to start the new life she so badly desires.

Willa's bridesmaid duties thrust her into Maisie's high-energy world and into the path of hotshot doctor Liam Rafferty. But as Willa and Maisie form a real friendship, and Liam's annoyingly irresistible smile makes her reconsider her mantra that all men are trash, Willa's exit strategy becomes way more complicated. And when a secret from Maisie's past threatens to derail the wedding, Willa must consider whether friendship—and romance—are worth sticking around for.

Link to purchase the book
MY THOUGHTS:
Willa Callister had the perfect life. Well, perfect as far as she was concerned. Blogging has gone quite well for her and she is soon to be married. However, when Willa finds her fiancé in bed with her best friend she is beyond devasted. Willa no longer wangs to work on her blog, now considering it a thing of the past. Her heart is just too fractured and she simply feels uninspired to write. So, she moves in with her sister Stacey and tries to figure out how she will rebuild her life.
Quite disappointed in her new job with Stacey - as Princess Sparkleheart - so not fun for her, but needs must. She really hates it and it shows. She reluctantly decides to go on a coffee date with someone named Zachary. However, before Zachary arrives, she meets Maisie, a bubbly woman with a strange request - she offers Willa two hundred dollars to pretend to be her friend when her fiancé arrives. Maisie has no friends, just acquaintances as she puts it, and she wants him to think highly of her if she has at least one good friend. That turns into Willa becoming a bridesmaid - for a price - at Maisie's wedding. So, she soon becomes part of the wedding party, which then leads her to meeing Liam Rafferty, the best man at the wedding.
A single woman now. No real job and no future. But now a bridesmaid to a couple she does not know. Factor in that Willa and Liam have an instant attraction and Willa has no idea where her life will go from here.
Things begin to go well between Willa and Liam. More than that, however, Willa becomes quite drawn to Maisie and a bond of friendship starts to form. A sensitive story to be sure, especially watching the friendship between the two woman evolve. However, as in every romance story there is conflict, and that is something we see between Willa and Liam. However, my investment in this story was not with the couple, but moreso with Willa and Maisie. I really enjoyed watching that bloom even though things started out more as a business deal.
This was a delightful debut novel and I think Kerry Rea did a fabulous job connecting all of the characters together, touching on a sensitive subject and giving readers a happily ever after.
Many thanks to Berkley Books and to NetGalley for this ARC for review. This is my honest opinion.
ABOUT THE AUTHOR:

Kerry Rea lives in Columbus, Ohio with her husband and their small army of dogs. She grew up in Youngstown, Ohio and graduated from The University of Notre Dame. She believes that a happy ending is always possible. Visit her at authorkerryrea.com and on Instagram at @authorkerryrea, and on Twitter at @kerrymrea.