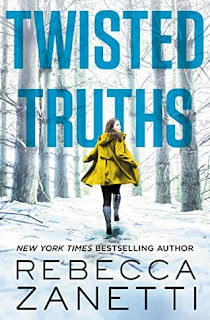 DESCRIPTION:
With twists and turns that will blow you away, TWISTED TRUTHS is a sexy, action-packed suspense at its very best.

Noni is desperate. Her infant niece has been kidnapped, and the only person who can save her is a private detective with too many secrets to count---and more enemies than he can name. A man who walked away from Noni without any warning a year ago, a man who broke her heart. But with Talia's life on the line, Noni needs his help now more than ever---and this time, she won't take no for an answer . . .

The moment Denver Jones sees Noni, the memories come rushing back. The fire in her eyes. The determination in her voice. The danger of having her in his life. Denver had to push her away once, but now with vicious criminals threatening Noni and her niece, he'll do whatever it takes to protect them. But enemies from his past are circling, and they'll use anything---and anyone---to get to Denver.

Denver Jones, along with brothers Heath and Ryker, are still trying to find Dr. Isobel Madison and Sheriff Elton Jones before they find them. If you have read Deadly Silence and Lethal Lies prior to reading this third book in the Blood Brother series, no doubt you will no why finding them in critical. As the story begins, Denver recounts his childhood and how he became embroiled in Madison's cruel life and why his life isn't his own, even as an adult.

Well, Noni Yuka practically brings Madison et al to the Jones' doorstep. Noni's infant niece Talia has been kidnapped and Noni needs Denver's help. They were a couple at one time, and although Noni has no idea why Denver left her, she firmly believes that Denver, as a private detective along with his brothers, is the only one who can rescue Talia. Noni blasts on social media that she and Denver are a couple.

Not only does this raise Denver's antenna, and he is more than eager to help, it also alerts Madison about the close proximity of Denver and his brothers. So, Denver has a boatload of troubles. No doubt, finding baby Talia and keeping Noni safe are critical to him. However, he knows Madison and Cobb will be close on his heels.

Denver had very good reason for abandoning Noni. His life is the epitome of danger. Leaving Noni was Denver's best way of protecting her. Now they are forced back together. Their connection is more powerful than ever, but also is the abject danger. Denver not only wants to help Noni find the baby, he wants to keep his brothers and their significant others safe, all while finding his mortal enemies.

For readers that have read the previous two books in the series, the fact that Denver truly regrets walking away from Noni is stressed. Now that she is back in his life, he is even more disillusioned.  All Denver ever wanted was for Noni to be safe.  Being back together is wonderful in many ways, but ultimately terrifying for Denver.

As with the previous stories, danger and passion war for attention. As far as the danger is concerned, Madison and the Jones brothers are closer than ever and that makes things extremely hairy. Meanwhile, the search for the baby presents wild dangers as well, especially considering who has her.

Twisted Truths is the third and final book in the Blood Brothers series. I read each story one after another and found myself completely enthralled. Ryker's story was first, then Heath's, and they were both amazing. However, there are extra layers to Denver's story and I found myself barreling through the story as I couldn't imagine how it would all work out. I love the Jones brothers, and from what I read of the Gray brothers (from the Sin Brothers series yet-to-read), I am truly impressed.

Kudos to Ms. Zanetti for snatching a couple of days out of my life and giving me a group of amazing people to engage myself with.

Although I have the print ARC, I listened to this via audiobook. This version had a wonderful bonus scene.