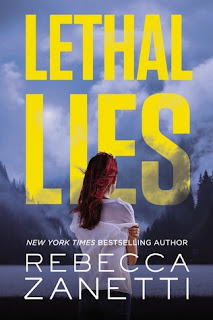 Revenge. It's the only thing that will help Anya Best sleep at night. The serial killer who murdered her sister is on the loose, and Anya will stop at nothing to put him behind bars-even use herself as bait to lure him out of hiding. But she can't do this alone.

Private investigator Heath Jones's job is to bring bastards to justice. This time it's personal. He knew the Copper Killer's latest victim so when her sister asks for his help, he's all in. But when Anya uses the media to taunt the killer, she exposes Heath's identity, putting them both in jeopardy. Now, secrets buried long ago are coming to light and the forces determined to destroy him are watching Heath's every move, waiting to exact their own revenge. And they'll use anything and anyone to get to Heath.

With twists and turns that will take your breath away, LETHAL LIES is sexy, action-packed suspense at its very best from New York Times bestselling author Rebecca Zanetti.

Anya Best is beside herself. A serial killer murdered her sister, an FBI agent, and he is on he loose. Anya will do anything to help catch the man, even acting as bait. Not so to private investigator Heath Jones. As he knew the latest victim of the serial killer, when her sister, Anya, asks for help, he indeed steps in. Heath, along with his brothers, Ryker and Denver, has his own method for getting the guy. However, Anya unwittingly thwarts Heath's plans, as she taunts the killer, thus placing both herself and Heath in danger.

Heath's past is dangerous and things are coming to a head. Now exposed, Heath must contend with keeping not only himself and Anya safe, but must also protect his brothers. In the first book in this series, readers learned of Isobel Madison and Sheriff Elton Cobb. They were pivotal to the brothers' past, and are front and center when it comes to their present danger.

This book starts off with a bang! I found it to be thrilling as searching for the killer was paramount, but then so was staying one step ahead of Madison and Cobb. As in the previous story, there is passion, suspense and danger in spades. The Jones brothers are relentless, but are very good to the women in their lives. In this case, the relationship between Heath and Anya works, right from the outset.

Lethal Lies is the second on the Blood Brothers series. This book would be better served if Deadly Silence, the first in the series, has been read. The last book in the trilogy, which is another must-read, is Twisted Truths.