Review - The Last Woman in the Forest 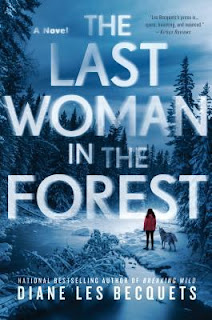 DESCRIPTION:
From the national bestselling author of Breaking Wild, here is a riveting and powerful thriller about a woman whose greatest threat could be the man she loves.…

Marian Engström has found her true calling: working with rescue dogs to help protect endangered wildlife. Her first assignment takes her to northern Alberta, where she falls in love with her mentor, the daring and brilliant Tate. After they’re separated from each other on another assignment, Marian is shattered to learn of Tate’s tragic death. Worse still is the aftermath in which Marian discovers disturbing inconsistencies about Tate’s life, and begins to wonder if the man she loved could have been responsible for the unsolved murders of at least four women.

Hoping to clear Tate’s name, Marian reaches out to a retired forensic profiler who’s haunted by the open cases. But as Marian relives her relationship with Tate and circles ever closer to the truth, evil stalks her every move.…

Marian Engström is comfortable living in unusual circumstances in the Rocky. She works with K'9's for Conservation and excels at her job with rescue dogs. Part of her research includes that of protecting very specific wildlife, like the wolves. In so doing she must be very wary of bears as the harm they can cause goes without speaking. However, that is not the danger that Marian is wary of. She wonders incessantly whether or not her ex-boyfriend Tate was a serial killer.

Tate was killed in a bear attack, but not before Marion raised serious doubts about their relationship and his activities. Currently, there exists a cold case involving the murders of several woman and Marian is convinced that Tate has knowledge of these women. What is worse is that Marian is overwhelmingly certain that Tate himself was the murderer. So, she hires Nick, an ex-forensic profiler who had studied the cases at one time.

Nick has heard the name Tate before. So, his hackles are immediately raised once Marian contacts him. A cancer patient, Nick is retired from profiling, instead serving as a counselor. He does agree to take the time needed to investigate Tate's past to see if he could have been the murderer and if the murders could have possibly stopped. Although Marion is traumatized by Tate's sudden death, she still must know if he was someone that she could have never imagined.

There were a few rabbit trails in this story, as it was told in the then and now. But, in effect, this definitely worked to establish Marian's past with Tate, the women whose lives were tragically lost, and perfecting the incredible conclusion. So, ultimately, these were not rabbit trails. The various stories were certainly of necessity when it came to reader involvement. There was a lot to be offered in this story. The setting was beyond gorgeous and Marian's attentiveness to her dogs was impressive.

Nick has a pivotal role is this book, as can be expected. He honed his decades of skill to help Marian unearth facts, no matter how painful. The book was ultimately terrifying, especially as this reader is a woman and women were indeed the victims written about in this book.

I am new do Diane Les Becquets,. I found the book to be very intriguing, and I am pleased that I got a chance to read this book. I do look forward to reading from this author again.

Many thanks to Berkley and to First To Read for this ARC to review in exchange for my honest opinion.

Diane Les Becquets is the author of THE LAST WOMAN IN THE FOREST (March, 2019) and BREAKING WILD, both published by Berkley, Penguin Random House. BREAKING WILD, an Indie Next Pick and a national bestseller, received starred reviews from Publishers Weekly, Kirkus Reviews, and Booklist. It was also the recipient of the Colorado Book Award in Fiction, the New Hampshire Outstanding Work of Fiction, and was shortlisted for the Reading the West Book Award in Fiction. Les Becquets is also the author of three young adult novels: THE STONES OF MOURNING CREEK (Kirkus starred review); LOVE, CAJUN STYLE (Booklist starred review) and SEASON OF ICE, the latter being the recipient of a Pen American Fellowship. Other awards she has received include a BCCB Blue Ribbon Award, the Maine Lupine Award, ALA Best Book of the Year, Foreward Reviews Gold Winner Book of the Year, Volunteer State Book Award Selection, and Garden State Book Award Finalist.

A former professor of English, Les Becquets has served as a judge for the New Hampshire State Council on the Arts and the Maine Arts Commission, and has taught writing workshops at venues across the country, including the University of Mississippi, Auburn University, the New Hampshire Writers' Project, the Department of Forestry, Writers Conference at Ocean Park, Writers in Paradise, the Arkansas Literary Festival, the Telluride Arts District, and at shelters for Katrina victims. She is a volunteer at Back in the Saddle Equine Therapy Center and an avid outdoors woman, enjoying archery, bicycling, snowshoeing, swimming, and backpacking with her dog, Izzy. Before moving to New Hampshire, where she now resides with her husband, she lived in a small ranching town in Northwestern Colorado for almost fourteen years, raising her three sons.

Diane Les Becquets is a member of the New Hampshire Writers' Project, the Association of Writers and Writing Programs, and the Pen American Center.