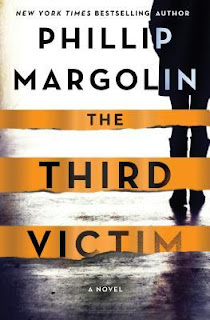 DESCRIPTION:
A woman stumbles onto a dark road in rural Oregon--tortured, battered, and bound. She tells a horrific story about being kidnapped, then tortured, until she finally managed to escape. She was the lucky one--two other women, with similar burns and bruises, were found dead.

The surviving victim identifies the house where she was held captive and the owner, Alex Mason--a prominent local attorney--is arrested. Although he loudly insists upon his innocence, his wife's statements about his sexual sadism and the physical evidence found at the scene, his summer home, is damning.

Regina Barrister is a legendary criminal defense attorney, known as "The Sorceress" for her courtroom victories. But she's got a secret, one that threatens her skill, her reputation, and, most of all, her clients. And she's agreed to take on the seemingly impossible task of defending Alex Mason.

Robin Lockwood, a young lawyer and former MMA fighter, has just left a clerkship at the Oregon Supreme Court to work for Regina Barrister. The Alex Mason trial is her first big one, a likely death penalty case, and she's second chair to Regina. Increasingly, she's worried her boss's behavior and the details in the case against their client don't quite add up.

After a woman is found battered and bound, she relates a terrible story of being kidnapped and tortured, but fortunate enough to escape. Two other women, similarly harmed, have been found dead. The woman who survived easily describes the house where she was found. The police then arrest the owner of the house, Alex Mason, who is a prominent local attorney.

A trial ensues and Alex maintains his innocence throughout. However, his wife has made statements to the police that raise their concern. She says that he is a sexual sadist. Then there is corroborating evidence found at the scene.

Alex's attorney is Regina Barrister. She is a legend, yet something serious is going on with her that could cost her everything, especially her job. There is a young lawyer working with her firm, Robin Lockwood, and Robin becomes Regina's second chair in the Alex Mason trial. It is the former MMA fighter's first big case, which could turn into a death penalty one. Robin has two problems. She is worried about the changes happening to Regina, and things are just not lining up with regard to her client.

The Third Victim is an excellent book. the pacing is done well, but it also has enough twists and turns to make this a very engaging read. The fact that the story is presented in different perspectives definitely make it rather intriguing. I scaled down my review only because a couple of the scenes were a bit too descriptive, so keep that in mind when considering this book. All said, it is a very quick read and I went right on to the next book in the series, The Perfect Alibi.

I grew up in New York City and Levittown, New York. In 1965, I graduated from The American University in Washington, D.C. with a Bachelor's Degree in Government. From 1965 to 1967, I was a Peace Corps volunteer in Liberia, West Africa. In 1970, I graduated from New York University School of Law. During my last two years in law school I went at night and worked my way through by teaching junior high school in the South Bronx in New York City. My first job after law school was a clerkship with Herbert M. Schwab, the Chief Judge of the Oregon Court of Appeals. From 1972 until 1996, I was in private practice specializing in criminal defense at the trial and appellate levels. As an appellate attorney I have appeared before the United States Supreme Court, the United States Court of Appeals for the Ninth Circuit, the Oregon Supreme Court and the Oregon Court of Appeals. As a trial attorney, I handled all sorts of criminal cases in state and federal court and I have represented approximately 30 people charged with homicide, including several who have faced the death penalty. I was the first Oregon attorney to use the Battered Women's Syndrome to defend a battered woman accused of murdering her spouse.

Vanishing Acts, a young adult novel written by me and my daughter Ami Margolin Rome was published in October, 2011 by HarperCollins.

From 1996 to 2009 I was the President and Chairman of the Board of Chess for Success. I am still heavily involved in the program and I returned to the Board after a one year absence in 2010. Chess for Success is a non-profit charity that uses chess to teach elementary and middle school children in Title I schools study skills. From 2007 to 2013, I was on the Board of Literary Arts, which sponsors the Oregon Book Awards, The Writers in the Schools program and Portland Arts and Lectures.