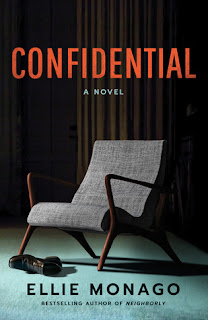 DESCRIPTION:
From the bestselling author of Neighborly comes a twisty novel of psychological suspense about the lies three women tell to survive, and the ones they’d kill to keep hidden.

Everyone loves therapist Michael Baylor. He’s handsome. He’s respected. And he’s provided a safe place for his female patients. Now he’s dead, and a detective is casting a tight net for the murderer—because the good doctor may have done some very bad things with the women who trusted him. That’s if their stories check out.

There’s Lucinda, who struggled to process her childhood trauma even as she was falling in love with Dr. Baylor. Greer, an accomplished career woman who was torn by her sudden desire to have children, so she went to Dr. Baylor for help but may have gotten more than she bargained for. And then there’s Flora, a beautiful former patient who’d been on intimate terms with the man she called Dr. Michael for two years. Some might even say she was obsessed with him.

Three women caught in a tangled web of lies and secrets. And each with a motive for murder. With so much at stake, can any of them be trusted to tell the truth?

Dr. Michael Baylor was a successful psychotherapist, especially when it came to his female patients. However, he is now dead and the detective in charge of the case has three potential suspects, Flora, Lucinda and Greer, Detective Gregory Flath certainly has his work cut out for him.

Each woman has a different story. Lucinda is trying to deal with childhood trauma. Greer is a career-driven woman who suddenly is desperate for a child, and is trying to work out the hows and whys. Then there is Flora, who started seeing Dr. Baylor for marriage counseling along with her husband Young.

As far as Flora is concerned, she began an affair with Dr. Baylor and they have been intimate for two years. As much as Flora might be in love with him, she is definitely just as obsessed. This is even to the point of resenting Dr. Baylor's time with his female patients.

Each woman, as things slowly reveal, is caught up in secrets and lies, and thus presenting a motive. Detective Flath is forced to question each of them at length, especially since doctor-patient privilege stands even after Dr. Baylor's death.

Confidential is delivered in knife-sharp precision in the past and present. Presently, the story is told from the detective's point of view. As far as the past is concerned, each woman's story is relayed. It becomes rather easy to see why these women need a therapist. To a large degree, each one of them is unraveled, falling apart at various times for various reasons.

There is not a single likeable character in this story! Yet, it is compelling from page one. Along with the detective, the job of the reader is to ascertain which of the woman is responsible for the murder of Dr. Baylor. Read well. Read carefully, as there are a lot of clues along the way.

What a book! I could not put it down, except for when my body demanded sleep. Otherwise, this would have been a one-sitting read. I enjoyed the writing style of Ellie Monago. I am certain that her real-life job as a therapist went a long way when it came to getting into the minds of Flora, Lucinda and Greer, all the while seeing how manipulative Dr. Baylor actually was.

I definitely found a new favorite author! So much so that I was forced to put aside what I had planned next to read in order to read her previous novel, Neighborly, which was equally engaging. I will be looking forward to anything else this immensely talented author pens.

Many thanks to Lake Union Publishing and to NetGalley for this ARC to review in exchange for my honest opinion.

Ellie Monago (not her real name) is the author of the bestselling novel Neighborly. She is also an acclaimed novelist—under her given name—and a practicing therapist. As well as being a wife and mother, Ellie is an avid tennis fan, a passionate reader of both fiction and nonfiction—especially memoirs (because nothing’s as juicy as the truth)—and a firm believer in the restorative value of a good craft cocktail.