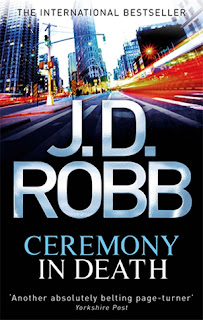 Conducting a top secret investigation into the death of a fellow police officer has Lieutenant Eve Dallas treading on dangerous ground. She must put professional ethics before personal loyalties. But when a dead body is placed outside her home, Eve takes the warnning personally. With her husband, Roarke, watching her every move, Eve is drawn into the most dangerous case of her career. Every step she takes makes her question her own beliefs of right and wrong--and brings her closer to a confrontation with humanity's most seductive form of evil...

Things are never easy for Lieutenant Eve Dallas. A fellow police officer has died and the investigation is extremely challenging. One of the issues Eve must contend with is that the circumstances surrounding the death, and that of another person, are rooted in pure evil.

As a matter of fact, when it came to the subject matter at hand, I wasn't so sure that I could finish this book. Eve must contend with an element new to her, Wiccans and Satanists. In the process of her investigation, Eve isn't so sure the practices have merit, enough merit to be responsible for the gruesome murders.

Meanwhile, Eve is at odds with a fellow officer more than once in this story. Add to this the ever-present danger facing Eve at every turn and what you have is another excellent book in this series. As always, Roarke is front and center when it comes to keeping Eve safe, especially when she gets a little too close to danger. All the while, Roake and Eve draw ever closer together.

This series is excellent so far, although I am only five books in. I look forward to reading each and every entry in this ongoing series. It is full of suspense, romance and just a bit of a futuristic edge.