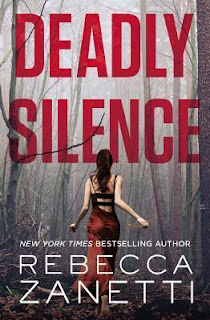 Under siege. That's how Ryker Jones feels. The Lost Bastards Investigative Agency he opened up with his blood brothers has lost a client in a brutal way. The past he can't outrun is resurfacing, threatening to drag him down in the undertow. And the beautiful woman he's been trying to keep at arm's length is in danger...and he'll destroy anything and anyone to keep her safe.

Paralegal Zara Remington is in over her head. She's making risky moves at work by day and indulging in an affair with a darkly dangerous PI by night. There's a lot Ryker isn't telling her and the more she uncovers, the less she wants to know. But when all hell breaks loose, Ryker may be the only one to save her. If his past doesn't catch up to them first...

Rebecca Zanetti has penned a thrilling start to a fantastic series. In this book we get to know the Jones brothers, and this story is Ryker's. He and his brothers, Heath and Denver, have started The Lost Bastards Investigative Agency. They have lost a client, and Ryker is devastated by her death. In addition, Ryker and his brothers have a tragic past that promises to never let them go. All the while, Ryker is having an affair with Zara Remington, a paralegal, and it is one with no strings. She doesn't even know where he lives.

But, things change rapidly, and Ryker must check out some of Zara's activities, which are indeed querulous, even if it means bringing her close and trusting her more than he is prepared to do. Zara has own secrets, so she as drawn as she is to Ryker, she isn't so sure she wants to fully know him, especially if it proves that his secrets could put them at cross purposes.

A simple love story this is not. Ryker is a man with many layers. His past, present and future converge at every twist. Ryker is a dangerous man, but when it comes to Zara, his alpha tendencies protect her every moment, even when they are not together. I absolutely loved this story, and even went right on and read the next two books in the Blood Brothers series. I just had to see about Heath and Denver, as well as to see what would happen to their common enemies.

This story is full of sizzling romance, great suspense and tons of action. All the while Ryker and his brothers are hunting a serial killer, they are also dealing with an incredibly dangerous part of their past. Zara may indeed be vulnerable, but boy does she show amazing strength. She is the perfect match to Ryker.

I haven't read Ms. Zanetti's Sin Brothers series, which consists of four titles, but I definitely want to as the Gray brothers make an appearance in this series. Although they indeed provide a backdrop to the Jones brothers, this series is indeed separate and I had no trouble reading it. This series continues with Lethal Lies and Twisted Truths.