In this combined blog post, I will be reviewing all four titles in the remarkable Rescue Me series by Debbie Burns. I had the fourth book for review, and after reading the synopsis, just knew that I had to read the entire series in order. 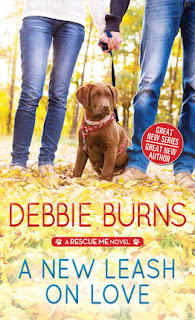 When Craig Williams draws the short straw and has to take his daughter’s adorable new puppy to a shelter after the holidays, it’s just another painful episode in the fall-out of a miserable divorce. He needs to pick up the pieces of his life, and, after a fiery confrontation with Megan Anderson, the young woman running the shelter, he wants to put the whole episode behind him. However, when he keeps finding new ways to reconnect with her, he realizes Megan’s compassionate and caring nature just might be the perfect salve for his broken heart.

Craig Williams has been grieving for quite some time. His family has suffered a terrible loss, and partly due to that, he is now divorced. Therefore, he must take his daughter's dog to a shelter immediately after the holidays. Craig is heartbroken, almost as much as his daughter Sophie.

When Craig meets the shelter's acting director, Megan Anderson, they knock heads. Craig presents as extremely angry and he definitely rubs Megan the wrong way. Their paths begin to cross, however, and soon Craig tries to level the playing field. He just might want a chance with her, despite the fact that his heart is still broken in a million pieces.

When I got the book Love at First Bark for review, I realized that it is the fourth book in the Rescue Me series. Since I am a series binge-reader, I went to my library and got all three previous titles, including this one, A New Leash on Love. I am so very glad that I stopped to read this book. It was incredibly touching on many levels.

For starters, the shelter Megan works at is a no-kill shelter. There simply are not enough of them across the country. Megan's dedication to the dogs was just so sweet. I especially loved her connection with the dog Sledge. Also, Craig was a very sincere character. his spirit had been crushed and I loved the light Megan put in his heart and soul. His daughter Sophie was another wonderful character in this story.

I am eager to continue this series. The other titles not mentioned are Sit, Stay, Love and My Forever Home, which are at the top of my TBR. 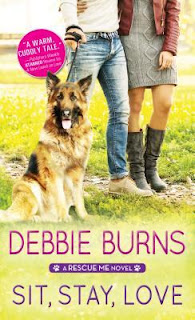 These dogs aren't the only ones in need of rescue

For devoted no-kill shelter worker Kelsey Sutton, rehabbing a group of rescue dogs is a welcome challenge. Working with a sexy ex-military dog handler who needs some TLC himself? That's a different story.

Kurt Crawford keeps his heart locked away from everyone. Well, everyone except the dogs who need his help...and always have his back. But as Kurt gets to know the compassionate, beautiful woman he's been assigned to work with, he can't help but feel a little puppy love...

When a huge dog fighting ring is discovered, the dogs will be in need of rescue and rehabilitation. Kelsey Sutton is a rescue worker in a shelter and she is asked to help with a few dozen dogs. Kelsey will not be alone in this and a specialized trainer is needed. She is none-too-pleased that it will be a former military guy, Kurt Crawford. He is far too gruff, and she cannot imagine working with him.

They do have the perfect location, however, and that is a donated mansion that will offer more than enough room to set up a unique program. So, Kelsey and Kurt begin working together. It should come to no surprise that the pair will have many problems to face. There are some undeniable facts, however. For one thing, they are both drawn to one another. More importantly, they both love dogs to the fullest extent possible, so these dogs will have every available opportunity offered to them.

As Kelsey gets to know Kurt, she sees the hard shell that protects the man she just knows is deep inside. In this sweet romance by Debbie Burns, more of the attention is on the dogs, all while the romance develops at a very nice pace.

This second book in the series is just as endearing as the first one. In part, this is due to some recurring characters, which is one of my favorite things in continuity series. 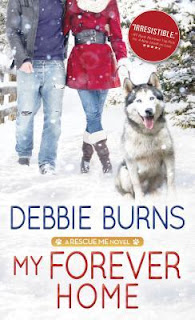 
Love comes to the rescue

Vet school drop-out Tess Grasso dreams of having her own pet therapy business, but she meets one disastrous obstacle after another. There's no denying she has a way with animals, so in the meantime she puts her skills to use at a local no-kill shelter. Between helping her furry companions and a budding relationship with fellow dog lover Mason Redding, Tess begins to find fresh confidence...

What Tess doesn't know is that Mason is recovering from an accident, hoping to get back to his pro-baseball career. He's afraid the truth will ruin everything-and he's right. But in the midst of hurt and betrayal, a free-spirited stray Husky enters their lives, and teaches them a few things about faith, love and forgiveness.

When Mason Redding helps Tess Grasso in a tough situation, the two hit it off right away. Tess wonders if she will ever see Mason again. Of course, things work to Tess's advantage and she soon sees Mason again. However, their relationship has a hitch Tess is unaware of. Mason is a major league baseball player, and he does not want Tess to like him because of his celebrity status.

The two have a problem that they are dealing with and this helps to bond them together. Mason has been trying to catch a stray dog and hopes to give him a home. This dog, loving named John Ronald even before Mason can get his hands on him, is pivotal to the story.

In this series, there is a lot of wonderful information that shows how connected these people are to the dogs in the stories. This story is no different. All the while, the relationship between Mason and Tess develops at a very nice pace. This is another sweet romance, with just the right amount of chemistry, and they are always so very nice to read. 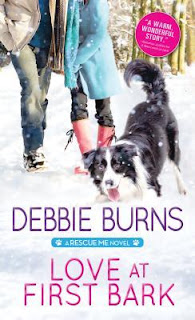 
"This heartstring-tugger is certain to win fans." —Publishers Weekly STARRED Review for A New Leash on Love

Animal portrait painter Mia Chambers and architect Ben Thomas have volunteered at the High Grove Animal Shelter for years, and they share a complicated history. Ben has secretly loved Mia all this time, but she was married to his best friend. Now she's newly widowed, with a young son, and Ben doesn't know how to tell her what's in his heart. All he can do is stay close, help her as much as she'll let him, and watch for the right moment to bare his soul.

When a dozen adorable border collies get dumped in St. Louis' biggest park, everyone at the shelter mobilizes for a large-scale rescue. Rushing to the park to round up the frisky collies, Ben and Mia unexpectedly plunge into a new phase of their entangled lives. Who knew that opening their hearts and homes—to animals in need and to each other—would lead to so many upheavals...and new beginnings...?

Mia Chambers and Ben Thomas both volunteer at a no-kill animal shelter. Mia was married, then separated, and ultimately widowed. The man she was married to was Ben's best fiend. There has always been a problem, however. Ben has been in love with Mia for years, and she never learned of his feelings. Not only do they see each other often at the shelter, Ben is Mia's son's godfather, so he still plays an important role in their lives.

A rescue operation concerning a dozen border collies throw Ben and Mia together yet again. Ben knows that he might find the right time to tell Mia of his feelings. Meanwhile, Mia was very unhappily married, yet she worries that she is more fond of Ben than she would like to admit.

I have loved every book in this series by Debbie Burns, but this is my favorite of the four. There were a lot of reasons. For one thing, and that is rather obvious. The dogs. Yes, the dogs. More than that is that Ben is just the nicest guy around, even spending quality time with a teen that needs a male role model. Also, Ben is a man of honor and does not want to disrespect the image of the father of Mia's son.

Yes, this is another sweet romance - all four books in this series are. Instead, the stories focus of saving dogs, training them, re-homing them, etc. As this is being done, the romance builds slowly, but it is ever so lovely, especially since the couple make certain to consider more than physical desires.

I will definitely be following this author. She writes stories that are wonderful, allowing readers to draw close to delightful characters. And, if readers love dogs, then that is just another bonus.

Many thanks to Sourcebooks Casablanca and to NetGalley for this ARC to review. This is my honest opinion. 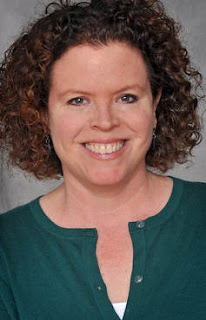 Debbie Burns is the award-winning author of the RESCUE ME romance series featuring love connections of the two and four-legged kind. Her writing commendations include a starred review from Publisher’s Weekly and a TOP PICK from RT Book Reviews for A NEW LEASH ON LOVE and an Amazon Best Book of the Month for My FOREVER HOME. Books one through four are available now, including LOVE AT FIRST BARK released July 2019.

Debbie lives in Saint Louis with her family, two phenomenal rescue dogs, and a somewhat tetchy Maine Coon cat who everyone loves anyway. Her hobbies include hiking, gardening and daydreaming, which of course always leads to new story ideas.