Review - The Duke Is But a Dream 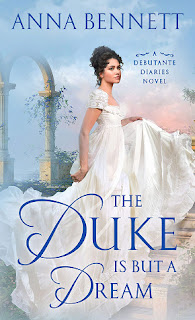 Once upon a time three young ladies vowed to record their first London seasons…and to fill in the gaps of their finishing school educations. Thus began The Debutante Diaries—and London will never be the same…

HE’S COME TO HER RESCUE

Miss Lily Hartley is the anonymous mastermind behind the ton’s latest obsession: The Debutante’s Revenge, a titillating advice column for ladies on the marriage mart. To keep her identity secret, Lily delivers her columns disguised as a chimney sweep—which is all well and good, until she unwittingly lands in the middle of an ugly tavern brawl. Fortunately, the devastatingly handsome Duke of Stonebridge sweeps in to rescue her.Unfortunately, Lily’s dressed as a boy—and holding rather incriminating evidence linking her to the scandalous column. Drat.

When Eric Nash, Duke of Stonebridge, sees a helpless lad receive a nasty blow to the head, he’s outraged. But when he discovers there’s a beautiful woman hiding beneath the chimney sweep’s cap, he’s positively stunned. Nash would happily escort her home, but she’s forgotten her name—leaving him little choice but to take her in himself until he can locate her family. But the closer he gets to finding them, the more he doesn’t want to let her go.

WILL THEY FIND LOVE?

Lily’s trying to figure out exactly who she is…in more ways than one. With so much at stake—her column, her reputation, and even her heart—she needs a plan, and she needs it fast. Before Nash finds her family. Before he learns who she is. Before they fall totally, completely, and utterly inconveniently in love.
Link to purchase the book

Miss Lily Hartley is the secret columnist behind The Debutante's Revenge. The column offers advice for young women seeking to marry. One night, when delivering her column, Lily is injured in a barroom brawl. She is saved by a handsome stranger, who is the Duke of Stonebridge, Eric Nash. Nash thinks he is saving a boy from being beaten. He quickly realize that it is actually a woman, but not before she is hurt.

He takes her home to the protection of his family, but she begins to panic. She has no idea who she is. Nash does everything he can to help her discover her identity, all while offering her his protection. Lily calls herself Caroline for the duration, and she endears herself to Nash and his sister Delilah.

Just before Lily left home the night she was hurt, her family had gone away, so they have no idea that she is missing. While Nash tries to locate them, they find that they cannot resist one another. This is something really, because Nash has a very good reason for never thinking he could actually find love. Also, Lily and Delilah's friendship is just so touching.

I enjoyed this book and the characters grew on me rather quickly. Lily's need for her memory to return kept my interest and I felt for Gray and his deep sadness. It was a delight to watch Lily warm his heart.

This is the second book in a series and it reads well as a standalone. The other books in the series are First Earl I See Tonight and the upcoming When You Wish Upon a Rogue. That book will be Lily's friend and fellow columnist Sophie's story.

Many thanks to St. Martin's and to NetGalley for this ARC to review. This is my honest opinion. 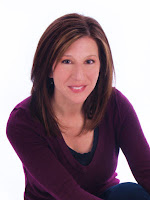 Anna Bennett is the award-winning author of the Wayward Wallflowers and Debutante Diaries series. Her dream of writing historical romance first took root during a semester in London, where she fell in love with the city, its history, and its pubs. Now she’s living happily ever after in Maryland with her tech-savvy husband and kids, who try valiantly not to roll their eyes whenever she quotes Jane Austen.

Anna spends a lot of time procrastinating on Twitter and Facebook, and she’d love to see you there! You can also keep up with her book news by signing up for her newsletter.

By the way, Anna wrote some books under the pen name Anne Barton, and you can find them on the Books page.