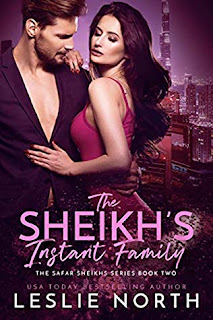 Sheikh Amad has always gone with his gut, which is why his ventures abroad have multiplied his tribe’s wealth and business connections. But with his 30th birthday approaching—and with expectations that he be married by then—he’s got to go home soon...That means leaving his life in Las Vegas, and Vanessa, the sexy waitress he’s falling for, behind.

Vanessa Hammerman has had to work for everything she’s ever had, left by every man from her father on up. Sheikh Amad has been fun, but she’s not thinking of a long-term commitment with a Middle Eastern prince. She’d rather keep it fun…until the pregnancy test comes back positive. Now she’s out on the biggest limb of her life: Will this man run from her, too? Or will he be the one to stay?

It seems like fate when Vanessa tells Amad he’s going to be a father, and his marriage proposal is instantaneous. It’s the perfect solution for fulfilling his duty while at the same time satisfying his heart. But when he brings her home to his tribe, he realizes his independent, Western bride might not work so well in the traditional structure of the Middle East.

Vanessa has put everything on the line for this: her heart, her career, and her life. So when she refuses to fall in line with Amad’s expectations, they begin to doubt if they can make it work. But if they take the chance, love could become the biggest win of their lives.
Link to purchase the book

Sheikh Amad was in Las Vegas for several months handling business. Falling into a relationship with Vanessa Hammerman led to her pregnancy and their sudden marriage. In all actuality, Amad was expected to be married by his 30th birthday, and things look like they just might have worked out.

Vanessa has mixed feelings about marrying Amad. For starters, she was trained by her mother to think the worst of men, that they would never stick around and to get all you can get while you can get it. But, not only does she agree to marry, she accompanies him to his home country in the Middle East. Only to discover that he is a Sheikh! And that his brother is a King!

In this second book of Leslie North's series, things move rather quickly for this couple. Their cultural differences shine through at times, so adjustments are definitely in order. I hadn't read the first book, and am pleased that this one worked well as a standalone.

This was a cute, quick read and I am interesting in seeing what else this series has to offer.

The truth of the matter is she loves her fictional persona, Leslie North, more than her normal, day-to-day persona! Her bestselling books focus on strong characters and particularly women who aren't afraid to challenge an alpha male. Inspired after years of travel, her stories are set all over the world, from the tough streets of Russia to the beautiful beaches of the middle east.

Leslie fell in love with romance when she first picked up a scrappy, dog-eared romance book from her local library. She began writing soon after and the rest, as they say, was history. She now lives in a cozy cottage on the British coast and enjoys taking long walks with her two Dalmatians, George and Fergie.

She LOVES reader feedback, and if you have any comments, don't hesitate to contact her on Goodreads.