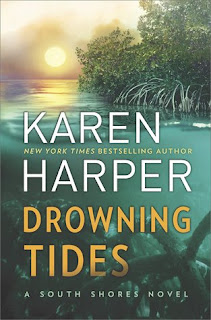 Danger is never far off

When forensic psychologist Claire Britten started working with lawyer Nick Markwood on his South Shores project, she had no idea it would endanger her life - and the life of her daughter. But when the little girl goes missing from her South Florida home and Nick insists his longtime nemesis is to blame, Claire frantically follows the trail to the Cayman Islands, desperate to save her daughter before it's too late.

Nick always knew the man who staged his father's "suicide" was out to get him, but kidnapping the child of someone he cares about is despicable. Finding the billionaire criminal is one thing - meeting his demands in order to save Claire's daughter is quite another. What he wants threatens their professional and personal interests beyond imagination - but what choice do they have when a child's life is on the line?"
Link to purchase the book

A shotgun wedding of modern proportions! At the end of the first book in the South Shore series by Karen Harper, Lexi was kidnapped. Boy was the ransom price high!

Although Claire’s daughter was kidnapped, it is lawyer Nick who was the target. The focus? Claire and Nick met previously when they testified against one another. Claire as a forensic psychologist and Nick as a high-powered attorney. After that case, Nick Markwood hired Claire Britton privately in a case that was possibly a murder.

The pair worked feverishly then to free a woman of the charge. All the while, they became increasingly close, although never crossing the line. However, Nick has a powerful enemy who devised an incredible scheme. By kidnapping Claire’s daughter, with Nick and Claire marrying as the ransom, Clayton Ames - the man that Nick is certain killed his father control Nick for life. Nick was trapped. Her could never, ever allow anything to happen to Claire or four-year-old Lexi.

They begin married life amidst all sort of trepidation, struggling to stay alive and to also find time to explore their connection.

Meanwhile, Claire’s ex-husband Jace just will not let go. He wants his daughter, of course, as Claire, Nick and Lexi have fled. What’s more is he wants Claire back.

What will happen? Will Nick and Claire find real love and solidify their marriage? Well, just as book one, Casing Shadows, ended in a cliffhanger, this one does the same. So, on to book 3, Falling Darkness.