Review - My Kind of Wonderful 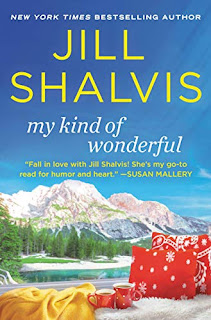 Bailey Moore has an agenda: skiing in the Rockies, exploring castles in Europe, ballroom dancing in Argentina. Now that she has a second lease on life, she's determined not to miss a thing. What she doesn't realize is that item #1 comes with a six-foot-one ski god hot enough to melt a polar ice cap. She doesn't want to miss out on him either, but Hudson Kincaid isn't the type of guy to love and let go. And as gorgeous as Cedar Ridge is, she's not planning to stick around.


As head of ski patrol at his family's resort, Hud thinks he's seen it all. But never has he run into someone like Bailey. She might look delicate, but her attitude is all firecracker. And her infectious joy touches something deep within him that he's been missing far too long. Now he'll just have to convince Bailey to take a chance on her biggest adventure yet . . . something rare and all kinds of wonderful.

A lot of people have bucket lists. Bailey Moore is one of them, but for very good reason. She has a second lease on life. After battling cancer for nearly ten years, she finally has a clean bill of health. Since she was diagnosed with cancer at the age of 15, there was a lot she missed in life. Bailey wants to ski on the rockies, dance in Argentina, and that is only for starters.

For now, she has taken on a job at painting a family mural at a resort. She accepted a job from Hudson Kincaid's mother, and as it turns out, Hudson is hardly pleased at the prospect. Bailey may be at the resort to paint, but she is delighted in the fact that Hud is actually the head of ski patrol, so she knows that will be soon one thing she can strike off of her list. Bailey must admit that she is rather drawn to Hud.

Hud has been struck between the eyes. He likes everything he sees when he looks at Bailey, but he is just about floored when she removes her hat and can tell at that very moment that this is one strong woman who no doubt has fought with major health issues. It is undeniable. As undeniable as the attraction he feels towards her.

Bailey and Hud often knock heads, especially because Hud is currently carrying the world on his shoulders. In part this is due to the fact that he hasn't seen his twin brother Jacob in years, and he won't give up looking for him. Furthermore, Hud is more than concerned for his mother, as she is coping with early onset dementia.

Both Bailey and Hud were remarkable characters. Bailey is as strong and as beautiful a they come. Hud was amazing because of the love he has for his family and how it was so easy for him to extend warm feelings toward Bailey while not being scared off with her health issues.

As My Kind of Wonderful is the second book in a series, there is extended family that were previously introduced in the first story, Second Chance Summer. As I just read that book, I definitely enjoyed seeing some of them here in this book. In addition, this series is rounded out by Nobody But You, which have already had the pleasure of reading. This book, and the entire series, is very touching, as well as being quite romantic.