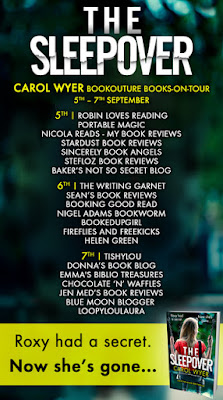 Today is my day for the Blog Tour for The Sleepover by Carol Wyer.

She said she’d gone to a sleepover. But she never made it. Someone must know why…

When Detective Natalie Ward is called to the home of fourteen-year-old Roxy Curtis she can’t help but empathise with Roxy’s distraught mother Cathy. Roxy hasn’t come home, last seen heading next door for a sleepover with her best friend Ellie. As the mother of two teenagers herself, Natalie knows that this is every parent’s worst nightmare.

But when Roxy’s body is found in the basement of a beautiful Victorian mansion on the other side of town, Natalie’s darkest fears are confirmed. What was Roxy doing there? The people who knew her best should know – but Cathy seems evasive, and Ellie refuses to talk. Natalie is determined to find out what secrets they are keeping…

When her body is found two days later, Natalie is forced to face the fact that Roxy’s loved ones are in real danger. Things take a more sinister turn when Ellie vanishes, her mobile phone switched off. Is Ellie hiding something about the night Roxy died that could put her in terrible danger? And can Natalie work it out before another innocent life is taken? 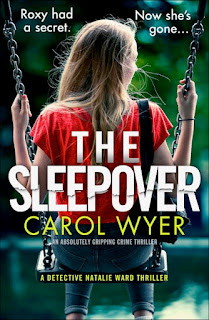 Roxy is a fourteen-year-old girl who tells her parents that she is going to a sleepover. However, not only did she not go to her friend's house that night, she died at a fire. Her family, especially her mother Cathy, are completely devastated.

Detective Natalie Ward is in charge of the case, and cannot help but think of problems she had with her own teen daughter Leigh. Also, her son Josh is going through some difficulties now. To make matters even more difficult for Natalie, her marriage to David has become increasingly difficult. David was made redundant on his job a while ago and he is dealing with an addiction. So, Natalie is completely overwhelmed, but must find answers as to what happened to the girl Roxy.

As she begins her investigation, she looks at the owners of the house where Roxy was found dead, two brothers. Natalie also looks hard at Roxy's family. When Natalie is called to another crime seen soon after Roxy's death, she is shockingly appalled to discover that the body belongs to Roxy's mother, Cathy. Natalie must widen the net in her investigation, so she begins to focus even more on the family, which include Roxy's stepfather and three brothers.

There are a lot of clues, a lot of suspects and more than one secret revealed in The Sleepover. The story is fast-paced and was a remarkably quick and compelling read.  Carol Wyer did a great job of making the discovery of the killer difficult to figure out. The conclusion was incredible. Reading this book was like savoring a seven-layer cake. Every turn in this book had a different flavor. This series keeps on getting better and better. Waiting for the next book will definitely not be easy.