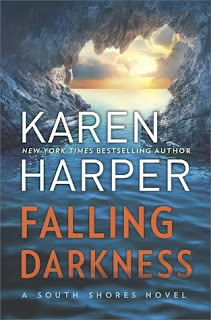 At the mercy of a treacherous sea

Claire Britten's training never prepared her for this the forensic psychology curriculum didn't cover plane crashes. Or how to help fellow survivors cope, seven frightened people huddled in two small rafts awaiting a rescue that may never come. Especially when three of them are your ex-husband, your young daughter and the man you love, Nick Markwood, whose pursuit by a criminal mastermind forced you all to run in the first place.

When the bedraggled crew finally reaches dry land, they are still far from safe. Nick tries to secure transport to their witness-protection placement, urging everyone to stick to the identities laid out for them. They don't need any complications. But when danger follows them to their supposed safe haven, Claire and Nick no longer know who is helping or harming them. Racked by doubt and mistrust, still hunted, they must band together or fall.
Link to purchase the book

At the end of the second book in this series, Drowning Tides, Claire Britton, new husband Nick Markwood, ex-Jace, their daughter Lexi, and a few others have managed to escape a crashing airplane and are now trapped between two rafts in shark-infested waters. With what seems like a miracle, they survive, but they are still followed by the very danger that keeps Claire, Nick and Jace in close proximity.

Claire and Jace had been married and had daughter Lexi. Jace, a pilot, left and divorced Claire, a forensic psychologist. He could not deal with the fact that she suffers from narcolepsy. However, Jace still feels very drawn to her and had wanted her back. While running from Claire's new husband, Nick's, enemy, Jace got drawn further into their lives and drama, hoping against hope to win Claire back.

While Jace has adjusted to the fact that he will never get Claire back, he remains a devoted father and now the trio of adults are transported to a safe haven - with help from the FBI. A new life awaits all of them.

Although their new living environment is beautiful, they are faced with the ugly, in the manner of another murder. As the FBI has put them in WITSEC, they don't know anyone else but each other, so who can they trust?

As the first two books in the series, the tension is very high, with excellent pacing, as is the romantic element involving Claire and Nick. Fortunately for readers, this book does not end with a pulsating cliff-hanger, yet we are definitely left wanting much more for the new couple and their growing family. As of the writing of this review, I just completed the fourth book in the South Shore series, Shallow Grave, and am currently reading the fifth, Silent Scream. Book six is in my immediate TBR, Dark Storm.