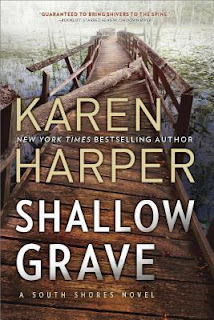 It’s been four months since forensic psychologist Claire Britten last crossed paths with danger. Finally feeling she can catch her breath, together with her partner, criminal lawyer Nick Markwood, Claire has settled into a new role, volunteering with a support group for children stressed by domestic violence. But a leisurely field trip to a wildlife sanctuary turns deadly, leaving Claire to question whether the death was an accident, suicide—or something far more sinister.

Nick gets the South Shores team on the case, hunting down anyone with a potential grudge against the sanctuary. But their investigation turns wild when other attacks come too close to home. With a hostile predator on the loose, Nick and Claire will have to race to unbury the truth before a killer wipes them from the endangered-species list for good.
Link to purchase the book

Forensic psychologist Claire Britton and new husband Nick Markwood can finally kick back and begin to enjoy life They spent months fighting more than one enemy, and have now been able to enjoy a nice, quiet time. Things have gone so well for Claire and Nick, and Claire's daughter Lexi, that Claire is even volunteering for a support group for children affected by domestic violence.

While visiting a sanctuary with the group of children, as well as Lexi and Nick, there is a sudden and deadly death. It most certainly has to be an accident, at least that is what everyone hopes. However, after this occurs, it becomes evident that things were not as they seemed at the sanctuary.

There is a deeper issue, and that clearly affects Claire and Nick. Claire's ex-husband, Jace, is still very involved in their lives. In large part, because he is very close to their daughter, Lexi. What is more, is that Claire and Jace still care for one another, especially due to the trauma they all experienced in the past (see the previous stories in this series). What is more is that Jace is now dating Brittany, who works at the sanctuary and is the daughter of the man that died.

Although I do my best to read entire series, those new to this series will be able to enjoy this book as a standalone. This is mostly due to the time when the story takes place, and the fact that Claire and Nick are settled, and Jace is dating again. So readers will have a lot to enjoy when they begin turning the pages of this book.

There is intrigue, extreme danger, romance and a strong family element. There is a bevy of wonderful characters that band together when needs must. Actually, I think that is one of the things that am enjoying most about this series, and that is the character development that goes alone with each story in the series.