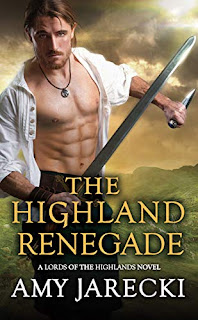 DESCRIPTION:
She is the daughter of his sworn enemy.

Famed for his fierceness, Laird Robert Grant is above all a loyal Highland clan chief. But when redcoats capture his rival's daughter, he sets aside their feud and races to her rescue. Aye, Janet Cameron is beautiful, cunning, and so very tempting, but a Cameron lass is the last woman he should ever desire.

He is her one hope of happiness.

Janet refuses to meekly surrender, not even when surrounded by foes. She takes every chance to escape, first from the English soldiers and then from the wickedly handsome Robert. Yet with each day they spend together, his unexpected gallantry chips away at her reserve little by little. As danger and treachery loom, can she trust him enough to choose love over vengeance?

Laird Robert Grant is a clan chief and is very loyal. His loyalty is truly tested when his rival's daughter is kidnapped. What else is Robert to do but put his differences to the side and to come to her rescue? Robert has bitten far more off than he could chew when it comes to Janet Cameron. For starters, her beauty just might be the undoing of him. He is tempted beyond belief, but the long-running feud in their families precludes any chance of a future together.

Janet has her hands full. For starters, her stepmother wants to marry her off. Going to a celebration with her brother just might offer her the chance to find a man of her own choosing. However, she finds she is in desperate need for escape. If not from the dangerous English solders, then definitely from the alluring Robert. How can Janet ever cope with an undeniable attraction to her father's sworn enemy?

Robert and Janet certainly have a bevy of difficult decisions to make. But this involves trust. This trust Janet must show Robert is in large part to an unthinkable act Janet does. However, what she did was certainly beyond her control. Now she is under Robert's temporary care, and knowing there can be no future certainly makes things incredibly difficult for the pair. It is especially hard because they were drawn to each other long before they met at the celebration.

The Highland Renegade has a lot to offer. Of course the romance between Robert and Janet is paramount. There is also the warm family connections between Janet and her brother Kennan (although he is more than a bit of a hothead), and Robert and his sister Emma. Considering the time period and the clan wars, there is a duel that can end things before they can even start. The English soldiers show their cruel and ugly faces more than once. (No doubt things had to be severely harsh for Scotland at that time.) This book is action packed. There are other factors in this engaging story, equally compelling.

This is the fifth book in the Lords of the Highland series. Although I had the pleasure of reading the first four books a couple of weeks ago, The Highland Renegade does quite well as a standalone. I certainly hope this series continues. The backdrop of this series is nothing less than spectacular and the characters are ones that I enjoyed being familiarized with.

Many thanks to Amy Jarecki, Megan Frampton and Forever for this ARC to review. This is my honest opinion.