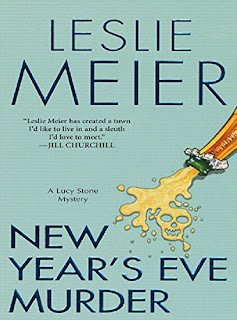 After the annual parade of Christmas presents in Tinker's Cove has ended, Lucy Stone and her daughter Elizabeth are ready to ring in the new year in style. Elizabeth has won mother/daughter winter makeovers in Manhattan from Jolie magazine! But the all-expenses-paid trip is bound to have some hidden costs--and one of them is murder. . .

After finally arriving at the offices of Jolie, meeting their fellow makeover candidates, and being treated to a fashion show, Elizabeth is enamored of the extreme outfits and stick-thin models--while Lucy's having some misgivings. The pampering is nice and the glitz and glamour of haute couture is bizarrely fascinating, but bitterness and aggression lurk behind Jolie's hipper-than-thou façade. And things turn downright ugly when self-absorbed fashion editor Nadine Nelson falls mysteriously ill and then dies. . .

Lucy saw first-hand some of the backstabbing going on at Jolie. And the red-hot rumor mill soon reveals that the cliquish connection among the magazine's cabal of high-style executives has stirred up plenty of bad blood over the years. But this Manhattan murder mystery hits too close to home when Elizabeth gets rushed to the hospital with symptoms that are disturbingly similar to Nadine's. Now, it's up to Lucy to dress down a killer before the ball drops in Times Square. . .

It is New Year’s Eve and Lucy Stone is excited to be able to spend it in New York with her oldest daughter Elizabeth. They are part of a team of mothers and daughters after Elizabeth won a winter makeover contest. The grand prize winners will win $10,000. As Lucy and husband Bill have gotten a letter informing them that they will be that much short for Elizabeth’s next year of college, the timing couldn’t have been more perfect.

Aside from looking forward to spending some one-on-one time with Elizabeth, Lucy hopes to visit with her long-time friend Samantha. However, they have a very full agenda, including fittings, photo shoots and the like.

As all of the pairs are working hard at the activities, suddenly Nadine Nelson, the fashion editor, falls ill and dies. Nadine wasn’t always well-liked, and the rumor mill was very much at work, so foul play is definitely suspected. What’s worse is that Elizabeth falls seriously ill and is hospitalized with very similar symptoms that affected Nadine before her death.

Lucy is an amateur detective, and she jumps right in to track down the killer. Most definitely time is of the essence. As always, this cozy mystery was a quick read it had just enough bite and intrigue to engage me in one sitting. Usually Lucy solves these crimes in her hometown of Tinker’s Cove. She has her work cut out for her in the Big Apple. New Year's Eve Murder was a very enjoyable story and had a delightful conclusion. I have been enjoying these stories and this is book 12 of 26. I look forward to continuing with the series.

These are all delightful reads and I look forward to continuing. I encourage readers of this review to look at my other reviews from this series on this blog. Also, here is a link to her series in order:  https://www.fantasticfiction.com/m/leslie-meier/.