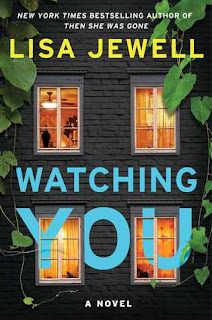 As the headmaster credited with turning around the local school, Tom Fitzwilliam is beloved by one and all—including Joey Mullen, his new neighbor, who quickly develops an intense infatuation with this thoroughly charming yet unavailable man. Joey thinks her crush is a secret, but Tom’s teenaged son Freddie—a prodigy with aspirations of becoming a spy for MI5—excels in observing people and has witnessed Joey behaving strangely around his father.

One of Tom’s students, Jenna Tripp, also lives on the same street, and she’s not convinced her teacher is as squeaky clean as he seems. For one thing, he has taken a particular liking to her best friend and fellow classmate, and Jenna’s mother—whose mental health has admittedly been deteriorating in recent years—is convinced that Mr. Fitzwilliam is stalking her.


Tom Fitzwilliam is a teacher who has been attracting quite a bit of attention - both in the present and the past. Currently, Tom is the subject of a crush by new neighbor Joey Mullin. Joey is newly married, and her husband truly believes her to be happy, but she has salacious thoughts of Tom. Thoughts that she would do just about anything to turn into action.

The neighborhood they live in, Melville Heights, is idyllic and is the envy of those not residing there. But things are not as nice as they seem. There is a voyeur in the neighborhood. The voyeur is none other than Tom's fourteen-year-old son Freddie. Freddie is a prodigy who uses technology to watch the goings on of his neighbors. Freddie is convinced that his father is not the perfect teacher and headmaster everyone believes him to be. He can prove it.

This story is presented in both past and present. This includes journal entries of two decades ago that a teenage girl wrote in her diary. Of course her obsession was with none other than the ever popular Mr. Fitzwilliam. Not only do we have the dysfunctional Fitzwilliam family, we have Joey, her husband Arty, her brother and sister-in-law, and students at Tom's school. Indeed, quite an interesting lot.

In one way or another, as things play out in Watching You, everyone is connected. Not only is everyone watching everyone else, several are keeping secrets. At the heart of the matter is a brutal murder. By the time the reader learns of this, everyone makes a believable suspect. So this book could easily be called The Suspect, because no one is above guilt. Not only are many secrets at play, providing motives, but the means are there, leaving even the most attentive reader like myself scratching my head more than once.

This was a great, one-sitting read! I sometimes felt as if I was being just as nosy as all of the neighbors. I loved some of the characters, felt sorry for some of them and greatly disliked some of them. To me that represents excellent writing. I was definitely pulled in and engaged. What shocked me, though, was the conclusion. With many people to choose from to be the murderer, well, let's just say I was dead wrong. Upon further thought, I can sort of see where I might've guessed, but maybe not. So, grab this for yourself and see if you can figure out who really was watching who.