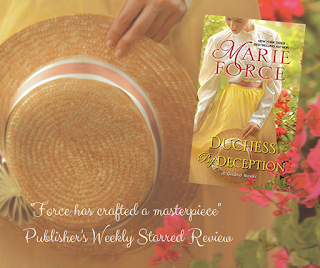 Today is my day for the Blog Tour for Duchess by Deception by Marie Force.

Listen to an Audio Sample: http://geni.us/dbd1audsample 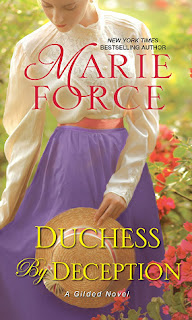 DESCRIPTION:
In New York Times bestselling author Marie Force’s dazzling historical romance debut, the clock is ticking for a wealthy Duke who must marry by his thirtieth birthday—or lose his title...

Derek Eagan, the dashing Duke of Westwood, is well aware of his looming deadline. But weary of tiresome debutantes, he seeks a respite at his country home in Essex—and encounters a man digging on his property. Except he’s not a man. He’s a very lovely woman. Who suddenly faints at his feet.

Catherine McCabe’s disdain for the aristocracy has already led her to flee an arranged marriage with a boorish Viscount. The last thing she wants is to be waylaid in a Duke’s home. Yet, she is compelled to stay by the handsome, thoughtful man who introduces himself as the Duke’s estate manager.

Derek realizes two things immediately: he is captivated by her delicate beauty, and to figure out what she was up to, Catherine must not know he is the Duke. But as they fall passionately in love, Derek’s lie spins out of control. Will their bond survive his deception, not to mention the scorned Viscount’s pursuit? Most important, can Catherine fall in love all over again—this time with the Duke?

Derek Egan, Duke of Westwood, is about to turn thirty, and there is the unfortunate stipulation that he must marry before his next birthday. If he does not marry, he forfeits his title as well as his inheritance. Meanwhile, Derek discovers a woman on his property in Essex. She is feverish and he takes her in with hopes of saving her life. She is mostly unconscious that first night , and then Derek makes the choice to not tell her of his title. He instructs his staff to do the same.

Catherine has a single purpose which explains why she was on the property of the Duke of Westwood. However, she is totally unaware that the man who announces himself as Jack Bancroft, estate manager, is actually the Duke. Catherine reveals to “Jack” that she is on the run due to a violent man her father plans on marrying her off to.

From the moment their eyes met Catherine and Derek were smitten with one another. Will the man pursing her locate Catherine? What’s more, how long will Derek keep his true identity and need to marry a secret from her? No doubt these revelations will bring angst to her and may just color her newfound feelings towards him.

Duchess by Deception is a love match of two people that found one another at the perfect time in their lives. Danger ratchets up when the man pursuing Catherine gets too close and Derek shows his protective nature. They marry without her knowing he is the Duke. Their story is sexy, warm and tender. There was an enjoyable side story with his cousin Simon and her sister Madeleine.

Imagine my surprise when I discovered that this is Marie Force's first historical romance, and that is being published now! I think something that was written years ago that brings in such a romance as well as the turn of the century technology that was being developed will go far in the hands of other readers. As always, I am definitely a fan of this prolific author's work.

Many thanks to Marie Force, Zebra and to NetGalley for this ARC to review. This is my honest opinion.

Altogether, her books have sold 6.5 million copies worldwide, have been translated into more than a dozen languages and have appeared on the New York Times bestseller list many times. She is also a USA Today and Wall Street Journal bestseller, a Speigel bestseller in Germany, a frequent speaker and publishing workshop presenter as well as a publisher through her Jack’s House Publishing romance imprint. She is a two-time nominee for the Romance Writers of America’s RITA® award for romance fiction.