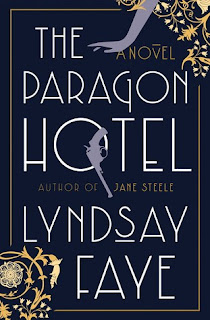 DESCRIPTION:
The new and exciting historical thriller by Lyndsay Faye, author of Edgar-nominated Jane Steele and Gods of Gotham, which follows Alice “Nobody” from Prohibition-era Harlem to Portland’s the Paragon Hotel.

The year is 1921, and “Nobody” Alice James is on a cross-country train, carrying a bullet wound and fleeing for her life following an illicit drug and liquor deal gone horribly wrong. Desperate to get as far away as possible from New York City and those who want her dead, she has her sights set on Oregon: a distant frontier that seems the end of the line.

She befriends Max, a black Pullman porter who reminds her achingly of Harlem, who leads Alice to the Paragon Hotel upon arrival in Portland. Her unlikely sanctuary turns out to be the only all-black hotel in the city, and its lodgers seem unduly terrified of a white woman on the premises. But as she meets the churlish Dr. Pendleton, the stately Mavereen, and the unforgettable club chanteuse Blossom Fontaine, she begins to understand the reason for their dread. The Ku Klux Klan has arrived in Portland in fearful numbers–burning crosses, inciting violence, electing officials, and brutalizing blacks. And only Alice, along with her new “family” of Paragon residents, are willing to search for a missing mulatto child who has mysteriously vanished into the Oregon woods.

Why was “Nobody” Alice James forced to escape Harlem? Why do the Paragon’s denizens live in fear–and what other sins are they hiding? Where did the orphaned child who went missing from the hotel, Davy Lee, come from in the first place? And, perhaps most important, why does Blossom DuBois seem to be at the very center of this tangled web?

”Terrible town of roses and rainfall.”

“Breaking down the color line.”

“A frog isn’t like a flamingo. That doesn’t make it a hippopotamus.”

The Paragon Hotel is a thriller with incredible fictional characters that are part of a compelling story based on historical facts.

The story begins with Alice “Nobody” James on a train, running for her life, with a life-threatening bullet wound. When Max, a black porter, sees her, he simply cannot leave her to die. He takes her to the Paragon Hotel, where he resides between his employ on trains. This is a real problem. It is 1921 Portland, Oregon, and the hotel is an all-black establishment.

One of the hotel’s many residents is a doctor, and due to his oath, he saves her life. The other long-time residents want Alice gone as soon as possible. For one thing, the racial tension in Oregon was beyond despicable and the KKK was moving in rapidly to “purify” the city of Portland. As a white woman, Alice’s presence is bound to create even deeper tensions.

One of the other guests was Blossom Fontaine, a stunningly beautiful singer with the voice of an angel. Blossom was pivotal to this story. There were other impressive guests, including the aforementioned Max, Dr. Pendleton, the overly religiously-minded Mavereen and little Davy Lee.

As Alice was fleeing Harlem, New York, her reasons for doing so were recounted in alternating chapters referred to as Then. Seeing how Alice grew up, as Nobody, was revealed in a series of painful recollections, and these included violence and murder. I couldn’t help but feel incredibly sorry for Alice. She suffered unimaginable pain and tragedy in her young life. In the Present chapters of this chilling book, there were several disconcerting scenarios, such as mental illness and the hatred that culminated in loss and further unspeakable violence.

I really appreciated this book, such as when powerful friendships were formed. But I also hated aspects of it. I was just not prepared to read what so many, many people suffered at the hands of others. Sadly, hatred and prejudice still exists in many pockets of this world. While my heart broke for those in this fictionalized account, I am truly saddened for the awful things still done by others in today’s world.

It is not simply dislike that was experienced in the pages of this book. Not hatred. Even worse, it was the loathing that these people suffered that literally shattered me. I cried four times during this book, even while reading the historical note at the end. There is no doubt that the author did an astonishing amount of research while writing this story.

The Paragon Hotel  boasts far more than impeccable research; the prose is absolutely superb. The characters are stellar, whether they are good or bad, and then there is the mystery that is ever-present. I literally had trouble putting this book down. I am truly eager to see how this book fares to other readers.

Many thanks to G.P. Putnam’s Sons and First to Read for this ARC for review. This is my honest opinion.

Lyndsay Faye moved to Manhattan in 2005 to audition as a professional actress; her schedule opened up when her day-job restaurant was knocked down with bulldozers.  Her first novel Dust and Shadow: an Account of the Ripper Killings by Dr. John H. Watson is a tribute to the aloof genius and his good-hearted friend whose exploits she has loved since childhood. After writing fifteen additional short stories over the next six years, she collected them in the critically acclaimed The Whole Art of Detection: Lost Mysteries of Sherlock Holmes.

Faye's fascination with the origins of the New York City Police Department led to her first Best Novel Edgar Award nomination; The Gods of Gotham, Seven for a Secret, and The Fatal Flame follow ex-bartender Timothy Wilde as he navigates the rapids of his turbulent city, learning police work in a riotous pre-Civil War political landscape. Following this trilogy, Faye turned to what she calls “satirical romance.” Her Edgar-nominated Jane Steele re-imagines Jane Eyre as a gutsy, heroic serial killer who battles for justice with methods inspired by Darkly Dreaming Dexter. Her latest novel, The Paragon Hotel, follows “Nobody” Alice James as she flees the Harlem Mafia only to wind up in Ku Klux Klan-plagued Portland, Oregon in 1921.

Aside from the Edgar, Faye was nominated for a Dilys Winn Award, was featured in Best American Mystery Stories 2010, and is honored to have been selected by the American Library Association's RUSA Reader's List for Best Historical.  She is an international bestseller and has been translated into 14 languages. While she doesn’t teach writing professionally in any capacity (nor is she remotely qualified), she does a great deal of volunteer mentoring and workshops for libraries.  In 2016, she was thrilled to implement the National Mentorship Program at Mystery Writers of America, and continues to serve as its coordinator.

Born in Northern California and raised in the Pacific Northwest, Lyndsay migrated back to "the Peninsula" and graduated from Notre Dame de Namur University with a dual degree in English and Performance. She worked as a professional actress throughout the Bay Area for several years, nearly always in a corset, and if not a corset then--at the least--heels and lined stockings.  She has a very high pop belt and is a soprano, supposing that interests you.

Lyndsay and her husband Gabriel live in Ridgewood, Queens.  During the few hours a day Lyndsay isn’t writing or editing, she is most often cooking, cooing at her houseplants, nuzzling her cat (Prufrock), or sifting through thrift store racks for designer clothing.  She is a very proud member of Actor’s Equity Association, the Adventuresses of Sherlock Holmes, the Baker Street Babes, the Baker Street Irregulars, and Mystery Writers of America.  She is hard at work on her next novel...always.