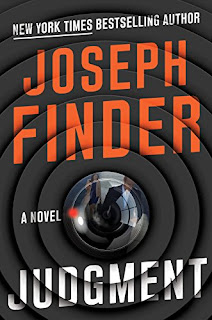 DESCRIPTION:
New York Times bestselling author Joseph Finder returns with an explosive new thriller about a female judge and the one personal misstep that could lead to her--and her family's--undoing.

It was nothing more than a one-night stand. Juliana Brody, a judge in the Superior Court of Massachusetts, is rumored to be in consideration for the federal circuit, maybe someday the highest court in the land. At a conference in a Chicago hotel, she meets a gentle, vulnerable man and in a moment of weakness has an unforgettable night with him. They part with an explicit understanding that this must never happen again.

But back home in Boston, it becomes clear that this was no random encounter. The man from Chicago proves to have an integral role in a case she's presiding over--a sex-discrimination case that's received national attention. Juliana discovers that she's been entrapped, her night of infidelity captured on video. Strings are being pulled in high places, a terrifying unfolding conspiracy that will turn her life upside down.  But soon it becomes clear that personal humiliation, even the possible destruction of her career, are the least of her concerns, as her own life and the lives of her family are put in mortal jeopardy.

In the end, turning the tables on her adversaries will require her to be as ruthless as they are.

Judge Juliana Brody made a decision that would most certainly threaten her judgeship, family and her very life. While away at a conference, Juliana makes the errant decision to sleep with someone. Once in a lifetime. They will put it behind them. Not so.

Back on the bench, Juliana has a difficult case ahead of her. She is presiding over a sex-discrimination case. This case has garnered national attention. What’s more is that Juliana has been set up. The man that she had the one-night stand  with shows up in her courtroom making the most unreasonable demands. Make a certain decision in her current case, or a video of their sex-filled night will be released everywhere. It is not just the man she had an affair with has something against her, what Juliana has to be aware off is that strings are being pulled that could bring everything crashing down.

Something stinks at a very high level. People are dying. Is Juliana safe? What of her family? No doubt her judgeship pales in comparison to those very people that are close to her heart. Other than here glaring indiscretion, Juliana is fairly happily married and she will do just about anything to protect her marriage.

The case involves the most nefarious of individuals, Russian Mafia. The head of the organized crime family will go to any extent necessary to get Juliana to make a certain ruling. The interests concerned are directly related to the sex-discrimination case and if Juliana doesn't rule as they are blackmailing her to, far-reaching effects will be felt in more than one way.

I thought I knew how this book would end up and was prepared to go for a lower rating. However, the twists and turns were nothing less than chilling and this indeed flavored my rating. Not only was I impressed by the writing of Joseph Finder - the plot, the characters, the ending - the acknowledgements led credence to this well-crafted tale. I certainly look forward to reading much more by this prolific, bestselling and very masterly author again.

Many thanks to Penguin Group Dutton and to Edelweiss for this ARC to review in exchange for my honest opinion.

Joseph Finder is the New York Times bestselling author of fourteen previous suspense novels, including THE SWITCH, THE FIXER and SUSPICION. He introduced “private spy” Nick Heller in VANISHED, an instant bestseller, and the continuing series includes BURIED SECRETS and GUILTY MINDS.

A founding member of the International Thriller Writers, Joe is also a member of the Council on Foreign Relations and the Association of Former Intelligence Officers. He is a graduate of Yale College and the Harvard Russian Research Center, and lives in Boston.