Review - What Happens in France 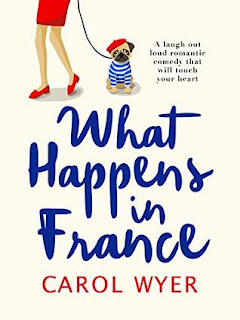 Camelot Digital Publishing Limited is delighted to announce the acquisition of two heart-warming women’s fiction novels by bestselling author Carol Wyer. The first new book – What Happens in France – is to be released on 4th February 2019, with an as yet untitled second book provisionally scheduled for April 2019.

In What Happens in France, Bryony Masters isn’t one to shy from a challenge, so when her father falls sick she makes it her mission to find her long-lost sister and reunite their family. With the help of handsome friend Lewis, she snags a coveted spot on a primetime game show set in beautiful France – the perfect, public platform to launch her search!

With a social media star dog, a high maintenance quiz host and a cast of truly unique characters, Bryony and Lewis have their work cut out for them to stay on the show and in the public eye. Yet as the audience grows and the grand prize beckons they find that the search that brought them together may just fulfil more than one heart’s wish…

What Happens in France will delight fans of Fiona Gibson, Daisy James and Jo Watson.

Carol Wyer said ‘To say I am thrilled to be joining Canelo is an understatement. I'm so looking forward to working with the wonderful Hannah Todd and the rest of the team on two new comedies and can't wait to share them with you.’

Hannah Todd, Assistant Editor at Canelo, said ‘I am absolutely delighted to be working with Carol on her hilarious women’s fiction. Carol’s novels are like a conversation with a friend; you sit down for a good giggle and leave feeling better for it! I can’t wait to share them with her fans.’

As a child, Carol Wyer was always moving and relied on humour to fit in at new schools. A funny short story won her popularity, planting the seed of becoming a writer. She won the 2015 People’s Book Prize Award for non-fiction, and can sometimes be found performing her stand-up comedy routine Laugh While You Still Have Teeth. Now writing full-time, Carol has several books published alongside journalism in many magazines.

Canelo are a digital publisher based in London, specialising in commercial fiction.

Bryony Masters has a mission. Her father has suffered a serious stroke. He gets better to a degree, but Bryony feels that she must now do the impossible. Thirty years ago her older sister Hannah ran away from home. Her family has never been the same since. Bryony feels that she must find Hannah before her father has any further health issues. She comes up with a fantastic idea. She decides to apply for a game show, hoping that this may be a way to appeal to the public in order to find her sister. Bryony knows that there very well may be several media opportunities that she can take advantage of.

Bryony has a blog dedicated to her search for Hannah. However, although she leaves regular blog posts, her reach is rather limited. Meanwhile, Bryony enjoys time with with her best friend Melinda. This turns out to be a blessing, because Melinda‘s husband has a new friend named Lewis. Due to ideal circumstances, Lewis ends up becoming Bryony’s partner on the game show, which is called, What Happens in ...

As expected, Bryony gets plenty of opportunities to talk about Hannah and about how much she is loved and truly missed. During the show quite a bit happens and each activity is really enjoyable to read about. I loved the trivial aspect of the show, all the characters in the story, and the beautiful landscapes that were described during the events.

Carol Wyer has written an engaging women’s fiction story that develops into a wonderfully-endearing romance. I really enjoyed the humor that was peppered throughout the story. One thing that really worked for me was a twist that was funny and very surprising. The story was very well-balanced as there were sensitive moments that kept me keenly interested. What Happens in France flowed very well because it was rich with delightful characters, including a dog with a strong media presence of his own. This delightful read is done with excellent pacing, thus showcasing the marvelous talents of this prolific author.

Many thanks to Carol Wyer and to NetGalley for this ARC to review in exchange for my honest opinion.