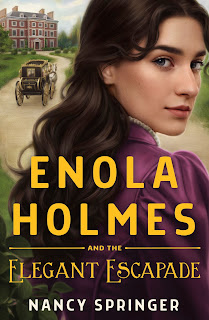 Title:  Enola Holmes and the Elegant Escapade
Author:   Nancy Springer
Series:  Enola Holmes #8
Publisher:  Wednesday Books
Genre:   YA Historical Mystery
Format:  Kindle and Audiobook ARC
Narrator:  Tamaryn Payne
Length:  4 hrs and 17 mins
No. of Pages:   240
Date of Publication:   September 6, 2022
My Rating:   5 Stars
DESCRIPTION:
Enola Holmes, the much younger sister of Sherlock, is now living independently in London and working as a scientific perditorian (a finder of persons and things). But that is not the normal lot of young women in Victorian England. They are under the near absolute control of their nearest male relative until adulthood. Such is the case of Enola's friend, Lady Cecily Alastair. Twice before Enola has rescued Lady Cecily from unpleasant designs of her caddish father, Sir Eustace Alastair, Baronet. And when Enola is brusquely turned away at the door of the Alastair home it soons becomes apparent that Lady Cecily once again needs her help.

Affecting a bold escape, Enola takes Lady Cecily to her secret office only to be quickly found by the person hired by Lady Cecily's mother to find the missing girl—Sherlock Holmes himself. But the girl has already disappeared again, now loose on her own in the unforgiving city of London.

Even worse, Lady Cecily has a secret that few know. She has dual personalities—one, which is left-handed, is independent and competent; the other, which is right-handed is meek and mild. Now Enola must find Lady Cecily again—before one of her personalities gets her into more trouble than she can handle and before Sherlock can find her and return her to her father. Once again, for Enola, the game is afoot.
Link to purchase the book
MY THOUGHTS:
Our young Enola Holmes is quiet effective as a perditorian, finder of lost persons and things, according to Enola herself. In fact, when I Googled the word, the Enola Holmes series is the first link! In fact, my search for an accurate definition reminded me that there is a Netflix movie, and I discovered that a second movie is coming this November, that features Enola Holmes, the much younger sister of Sherlock and Mycroft Holmes. Her brothers may have been her guardians, but Enola is quite independent and can definitely take care of herself.
Along the way in her search for her missing mother, Enola finds herself searching for other things. And This includes solving murders when the case arises. Although her brother Sherlock is a true genius when it comes to sleuthing, Enola has her own talents. These talents were cultivated by her mother, thus leaving Enola skilled in the most remarkable of ways.
Currently, Enola is busy while living a most unusual lifestyle in London, finding people and things while continually sharpening her skills. She gets that very opportunity when she finds that her friend Lady Cecile Alistair might be confined against her will. Acting on what is proving to be finely honed instinct, Enola decides to see what is going on in Lady Cecily’s circumstances.
The previous books in the series had Enola doing her best to solve crimes on her own, but in this book she is paired along with her older brother Sherlock. In fact, this is one of the things about this eighth book in the series that would make it work as a standalone novel.
While this book and series is targeted towards a younger audience, I am loving it! In fact, last year I did an extensive series review of the first seven books. You can find that series review here.
Enola is a delightful character. Always a solid plot in each book, with excellent character development, this series what will no doubt appeal to both young and old.
Many thanks to Wednesday Books, Libro,fm and to NetGalley for this ARC for review. This is my honest opinion.
ABOUT THE AUTHOR:

NANCY SPRINGER is the author of the nationally bestselling Enola Holmes novels, including The Case of the Missing Marquess, which was made into the hit Netflix movie, Enola Holmes. She is the author of more than 50 other books for children and adults. She has won many awards, including two Edgar Awards, and has been published in more than thirty countries. She lives in Florida.
web | twitter

Email ThisBlogThis!Share to TwitterShare to FacebookShare to Pinterest
Labels: 5 Stars, series, YA